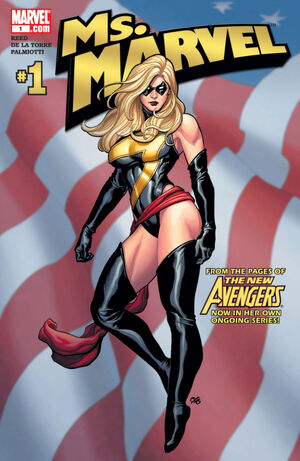 Appearing in "Best of the Best"Edit

Synopsis for "Best of the Best"Edit

Carol Danvers, the former Avenger once known as Warbird, has returned to her original identity – Ms. Marvel. She flies down through New York City where she finds Stilt Man terrorizing some citizens. Stilt Man flings a car through the air where it nearly strikes a group of children. Ms. Marvel swoops down, catches the car and throws it back at Stilt Man. She then finishes him off with an energy blast.

Later, Carol meets with her close friend, Jessica Drew. She tells Jessica about her experiences with Stilt Man and the fact that she has yet to establish a true name for herself. She further details her recent meeting with public relations agent, Sarah Day. Sarah promised to help Carol refine her public image.

Carol leaves Jessica and flies across town looking to promote herself. Suddenly, a glowing green object streaks past her and she begins to chase after it. Concerned over whether this unidentified object poses a threat, she contacts Captain America. Cap is busy fighting H.Y.D.R.A. agents with Agent-13 and cannot currently assist her.

The green object crashes on the outskirts of Spaulding, Georgia and explodes in a blinding flash of light. Ms. Marvel descends into the epicenter of the blast and discovers that the cause of the phenomenon is a horde of Brood aliens. The Brood begin mercilessly attacking nearby pedestrians.

Retrieved from "https://heykidscomics.fandom.com/wiki/Ms._Marvel_Vol_2_1?oldid=1646298"
Community content is available under CC-BY-SA unless otherwise noted.