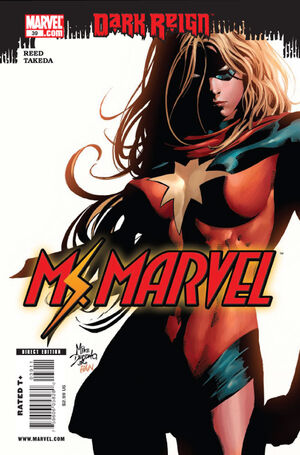 In Saudi Arabia, two trucks are driving across the desert. Suddenly, they approach a mysterious pink coloured energy being, with a distinctly female form. The entity speaks in an incomprehensible language. The drivers tell it about "two batches" on a boat and in Atlanta before they are killed.

In Atlanta, a meteor crashes into an office build by an A.I.M. reverse mass driver. The damage is lessened by Ms. Marvel, aka Karla Sofen. She is interviewed by the media but she avoids questions about not being the real M.s Marvel. She reports back to Osborn about the group of A.I.M. accountants she found.

Flashing back to minutes earlier, Karla storms into their office. The man in charge, Reginald Fisher orders hsi people to stand down. Karla then tells him Osborn's offer to unite the warring factions of A.I.M. to support him. Fisher then shows her a batch of baby M.O.D.O.K.s, which were created from old M.O.D.O.C. (Mental Organism Designed Only for Computing), as the next generation of Storytellers, able to create things with their minds. To prove that A.I.M. doesn't need Osborn, they have already sent a meteor to Manhattan, Stark Tower, which she is suppose to fly out to save. Suddenly, Karla hears a few voices in her head, stating that A.I.M. is hurting them.

Back to the present, it is revealed that Karla sent the meteor back to Atlanta to kill Fisher.

Somewhere in the Atlantic, the Donna Blue cruiser is engulfed in flames. This time, a blue coloured female entity is on board, locating the batch of M.O.D.O.K. it was looking for. The M.O.D.O.K.s scream that she is not Ms. Marvel.

Karla had stolen the Atlanta batch of M.O.D.O.Ks, hidden from Osborn. Suddenly, a yellow coloured entity bursts in, obviously demanding the babies.

Retrieved from "https://heykidscomics.fandom.com/wiki/Ms._Marvel_Vol_2_39?oldid=1447192"
Community content is available under CC-BY-SA unless otherwise noted.