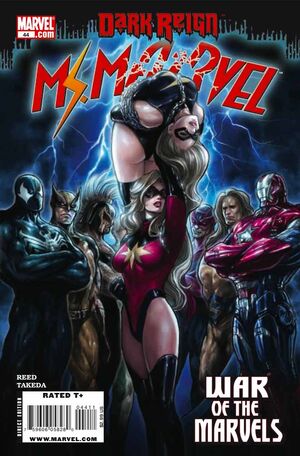 Back off, Venom! Danvers is mine!

Karla Sofen, Lily Hollister and Norman Osborn are standing over an unconscious Ms .Marvel/ Carol Danvers on the floor of Osborn's private residence. Lily explains to the two that earlier, Danvers barged in, demanding to know where Osborn was. She pelted her with a pumpkin bomb and she fell down. Karla is confused as to how Danvers was stunned so easily, when in Los Angeles, she hit her with a car repeatedly and threw her through a jet engine. Osborn doesn't care and orders his HAMMER agents to cart Danvers away and prepare to transfer her to Thunderbolts Mountain.

Meanwhile, Catherine Donovan is en route to New York. Once she gets there, she makes an excuse to her co-worker before going to Avengers Tower. All the while, Ms. Marvel is strangely breaking though the adamantium-vibranium inhibitor chair restraining her, something that not even the Sentry and Ares could break together, even pumped full of sedatives. Soon enough, Donovan arrives at the doorstep of Avengers Towers but then HAMMER agents presume her to be Danvers and pull up guns. Then suddenly, Danvers appears in from of Donovan, telling her to run, which she does. A HAMMER agent reports this to Osborn, who is very confused of there being two Carol Danvers, who call the Avengers. They gang up on Donovan, who is running away scared. Bullseye soon strikes her in the leg with an arrow before Karla brings her up by the neck. Luckily for Donovan, Osborn orders her to drop her. Once Donovan is in medical care, Osborn and Karla survey the two look-a-likes. Soon enough, Danvers breaks free of her bonds and defeats her guards. Karla then realizes that Donovan is connected to Danvers, realizing that as long as they are closer together, Danvers is invulnerable. So the only answer to stop Danvers is to kill Donovan. Osborn goes to confront Danvers as Karla prepares to kill Donovan.

Retrieved from "https://heykidscomics.fandom.com/wiki/Ms._Marvel_Vol_2_44?oldid=1447198"
Community content is available under CC-BY-SA unless otherwise noted.