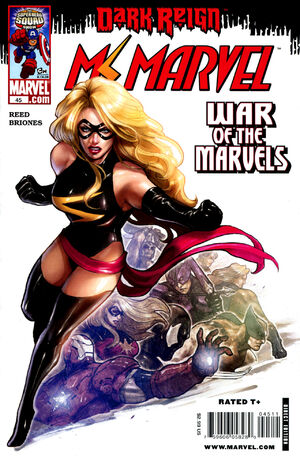 Your era of the Avengers ended because they couldn't close the deal and kill the troublemakers. Norman Osborn and my team do not have that problem.

Appearing in "Chapter 4: Variations in Tactics"Edit

Synopsis for "Chapter 4: Variations in Tactics"Edit

Karla Sofen attempts to kill Catherine Donovan to defeat Carol Danvers but strangely, she is able to evade her attacks before being blasted in the back. Then suddenly, Danvers tackles Karla, pushing her out of the tower. Meanwhile, Donovan is faced with a brigade of H.A.M.M.E.R. troops, ready to fire on her. But once again, Donovan demonstrates fighting skills. All the while, a mysterious voice is telling her that they've granted her greatest desire: to be free from her burdens of Carol Danvers and Ms. Marvel.

Across town, the two Ms. Marvels crash into an office building. Karla then reveals to Danvers that she is actually a diversion while her teammates kill her doppelganger. Danvers attempts to return to the tower but Karla keeps her distracted by tossing civilians in the air for her to save.

Back at the tower, Donovan is confused as to the recent events. But once she reaches the elevator, the Iron Patriot is standing inside. She attempts to fire on him but the gun's recognization codes fail to fire on their designer. He then kills Donovan with a repulsor blast. Then suddenly, Donovan's body disincorporates into a bunch of energy cubes. The same voice, revealing itself as the Storyteller, then takes the cubes to fix their mess, so that Carol would be free again. They strike Karla, who is now proclaiming herself to be Catherine Donovan.

Retrieved from "https://heykidscomics.fandom.com/wiki/Ms._Marvel_Vol_2_45?oldid=1501827"
Community content is available under CC-BY-SA unless otherwise noted.