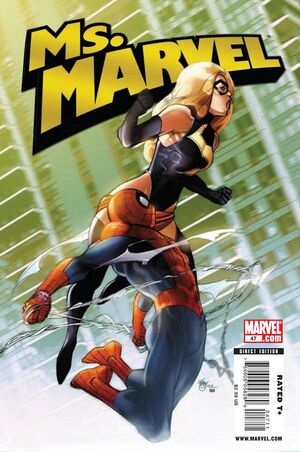 Be right back. Gotta hit the little Peter room.

Appearing in "The Amazing Spider-Date"Edit

Synopsis for "The Amazing Spider-Date"Edit

A masked crook on a jetpack is making his get-away with a bag full of cash. Spider-Man is chasing him but the crook flies upwards where he can't reach him. Then suddenly, Spidey pops out of the clouds, carried by Ms. Marvel. They tackle the crook and capture him for the police to arrest. The two Avengers then change into their civilian disguises for their past-overdue date. They eat at a small restaurant called the Blue Hill and talk about certain subjects like everyone has their own archenemy out to kill them, like Parker has Norman Osborn/Green Goblin against him or Danvers against Mystique. However, the restaurant is being surveyed by two H.A.M.M.E.R. agents, both a man and woman. The woman, who was present when Danver's alter ego Catherine Donovan entered Avengers Tower, suggests that they capture Danvers themselves. They storm in with their H.A.M.M.E.R. uniforms on, brandishing their guns. Carol changes into Ms. Marvel and takes the two agents outside, where she subdues them. She later claims to the restaurant owner that the agents stole H.A.M.M.E.R. tech.

Retrieved from "https://heykidscomics.fandom.com/wiki/Ms._Marvel_Vol_2_47?oldid=1447201"
Community content is available under CC-BY-SA unless otherwise noted.