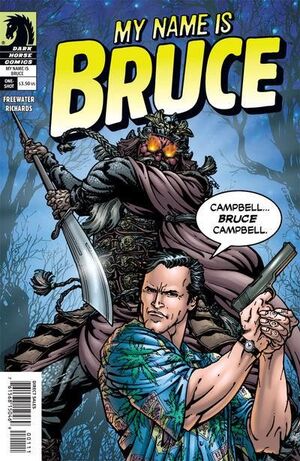 Okay, you two, here's the deal -- I'll stall the one-ton won ton. That should give you about thirty seconds to find a way to stop him before he rips my head off and throws it in my face.

Appearing in "My Name Is Bruce"Edit

Synopsis for "My Name Is Bruce"Edit

In the old mining town of Gold Lick, the spirits of two Chinese miners named Ling and Shen watch over a group of youths partying neared the closed down ruins of the old mine. Surrounding the ruins is a bleak cemetery populated with the bodies of Chinese laborers who died working in the mines. The mineshaft itself is the resting place of Guan-Di – Protector of long dead and forgotten Chinese miners and defender of bean curd.

One of the partiers, Jeff, removes a pendant from the ruins, which was used to keep Guan-Di’s spirit in place. The wrathful protector awakens and begins slaughtering the partiers much to the joy of Ling and Shen. Jeff barely escapes with his life. He believes that salvation can be found in the hands of his favorite B-movie actor – Bruce Campbell.

Jeff succeeds in contacting Bruce Campbell and tells him what transpired at the mine. Bruce, believing the entire affair to be nothing more than a prank staged by his agent, jovially agrees to help the boy out. He learns only too soon that the threat of Guan-Di is very much real. Campbell musters up his courage however and fights Guan-Di head on.

Meanwhile, Jeff's mother learns about Guan-Di’s secondary role as defender of bean curd. She goes to the cabin of the sleeping cemetery caretaker, grabs a few cans of bean curd, and gives them to Bruce Campbell. Bruce wields the bean curd like a crucifix before a vampire. The gambit works surprisingly, as Guan-Di will not strike an opponent who wields bean curd. Bruce lures Guan-Di back to his original resting place and seals him inside the mineshaft by replacing the pendant that Jeff had previously removed. Jeff and his mother are very thankful, and Bruce asks them that if they ever release an ancient demon again they should instead think of calling upon the aid of Buffy rather than himself.

Retrieved from "https://heykidscomics.fandom.com/wiki/My_Name_Is_Bruce_Vol_1_1?oldid=1474351"
Community content is available under CC-BY-SA unless otherwise noted.