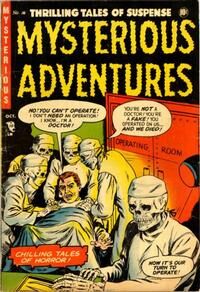 Appearing in "The Ice Man Cometh"Edit

Synopsis for "The Ice Man Cometh"Edit

Synopsis for "A Pound of Flesh"Edit

A mechanically inclined husband is sick of his fat wife so he decides to build a robot replacement. He finishes building the robot but has difficulty finding a substance to use as its skin that looks lifelike. He tries rubber and plastic but neither substance does the trick. While pondering the problem he admits to his wife that he has built a robot. She thinks he is being silly and laughs at the thought of dieting. He becomes enraged because he has become so disgusted by her obesity and seizes a knife from the kitchen with which he stabs her to death. He tells his friends that she is visiting relatives for a week and drags her body into the basement to skin her. When their friends visit the following week they compliment the man's 'wife' on how much the vacation agreed with her. Why, she must have lost at least seventy pounds!

A criminal wants to get even with his two buddies for cheating him at poker so he tells his stooge to dress up as a stoolie they had tortured and murdered a year ago and pretend to be the corpse returning on the anniversary of his death to seek revenge. The corpse shows up and brutally kills the two card players targeted for death, but then he turns on the man who orchestrated the killing. The criminal escapes thinking that his stooge must have flipped his lid, but when he returns to his apartment, he finds the man dead on the floor. The corpse of the man they murdered a year ago really has returned and after he kills the last one responsible for his death, he disappears.

Appearing in "The Death Statue"Edit

Synopsis for "The Death Statue"Edit

Retrieved from "https://heykidscomics.fandom.com/wiki/Mysterious_Adventures_Vol_1_16?oldid=1340596"
Community content is available under CC-BY-SA unless otherwise noted.