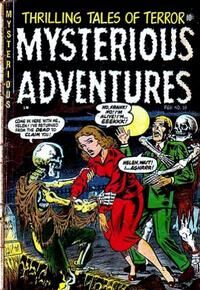 An old puppet master meets a young homeless girl about to jump off a bridge and invites her to stay with him until she finds work. She helps him with his puppets and over time he gets up the courage to propose to her which she accepts. Things go well enough for the couple until he develops a medical problem and the physician recommends that he retire. He tells his wife that he will hire a puppeteer and the income will continue so she need not worry. Unfortunately for him, the puppeteer he hires is young and handsome and the young man and the puppet master's wife immediately fall for each other. Since they know that a shock will be fatal for the old man, they decide simply to tell him the truth about their feelings for one another. It works, and the old man dies. That night, the puppets come to life and saw apart the puppeteer and the dead man's wife's joints and string them together with rope so when the police respond to the screaming and break down the apartment door they are confronted with a couple of human puppets.

Two footballers get suspicious about a kicker whose good luck ball never misses, so they try to get a look at it. The gym custodian tells that the kicker never lets it out of his sight, so they go to his house in an abandoned part of town. There, the psychotic football player reveals to them that his footballs are made with human skin, which is much better than pig skin. He skins the two of them and freshens up his ball.

Retrieved from "https://heykidscomics.fandom.com/wiki/Mysterious_Adventures_Vol_1_18?oldid=479862"
Community content is available under CC-BY-SA unless otherwise noted.