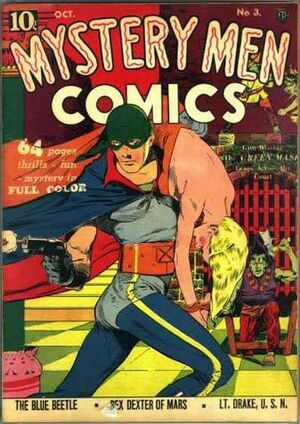 Appearing in "The Loan Shark Racket"Edit

Synopsis for "The Loan Shark Racket"Edit

As loan shark crime increases, Dan Garret goes undercover and borrows money from a loan shark. When his loan comes due, two of the loan shark's collectors come to acost him, but he beats both of them up and leaves a blue beetle with them so that they know who is on to them. The try to quit the racket, but the leader reminds them that he has their signed confessions that could lead them to the electric chair. At that moment, the Blue Beetle bursts through the window and beats all of them and leaves them tied up outside Police headquarters with each man's confession.

Appearing in "The Rule of J. J. Fakin"Edit

Synopsis for "The Rule of J. J. Fakin"Edit

"The Loan Shark Racket" was reprinted in Blue Beetle #1.

Retrieved from "https://heykidscomics.fandom.com/wiki/Mystery_Men_Comics_Vol_1_3?oldid=1621550"
Community content is available under CC-BY-SA unless otherwise noted.