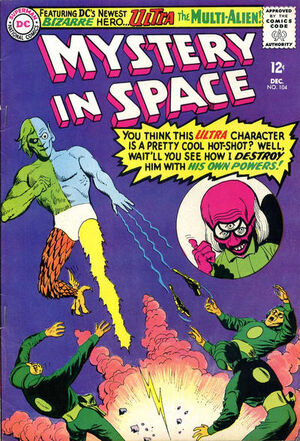 Appearing in "The Plutonian Who Plundered Planets"Edit

Synopsis for "The Plutonian Who Plundered Planets"Edit

As Ultra, the Multi-Alien flies his ship back towards Earth, he recalls the events that made him the bizarre creature he is today. Upon arriving on Earth, Ultra visits Dalesville, the hometown of his fiance Bonnie. Ultra watches as Bonnie worries about his fate and secretly thinks to himself that she should move on and find a new man as he is too hideous for her now. His thoughts are interrupted by a news bulletin describing a mist on Mars keeping people from entering or leaving it. Ultra decides he should investigate.

On Mars, Ultra enters the mist and finds a group known as the Moon Raiders controlling the local Martians. He tries to apprehend the Moon Raiders but they summon the Martians to destroy Ultra. Fearing he would injure the innocent Martians, Ultra fleas with a sample of the mist. After persuading the Martian patrols outside the mist that he is not responsible, Ultra analyzes the mist and discovers a solution. By spraying a chemical into the air and shooting lighting bolts from his leg, Ultra is able to dissolve the mist and capture the Moon Raiders. He finds out they are not responsible for the mist themselves but that they rented the saturated area from an Plutonian known as Dr. Taxo.

Meanwhile, Dr. Taxo has become aware of Ultra's success on Mars and decides to alter the chemical in the mist and leave a trap for Ultra on Earth. When Ultra arrives, he uses his chemical spray and shoots lightning at the mist just like on Mars and Jupiter. This time, it backfires and Ultra is hit with the lightning bolts, weakening him. Dr. Taxo uses this opportunity to try to finish off Ultra. Though drained of strength, Ultra is able to hold off Dr. Taxo until his powers return to full strength. He captures Taxo and dissolves the mist around Dalesville. A grateful Bonnie thanks the hero and wonders to herself just why he seems so familiar.

Appearing in "The World of the Jabberwock!"Edit

Synopsis for "The World of the Jabberwock!"Edit

Retrieved from "https://heykidscomics.fandom.com/wiki/Mystery_in_Space_Vol_1_104?oldid=1444106"
Community content is available under CC-BY-SA unless otherwise noted.