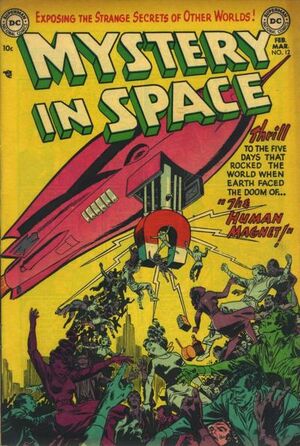 Appearing in "The Sword in the Sky"Edit

Synopsis for "The Sword in the Sky"Edit

Synopsis for "The Richest Man on 9 Planets"Edit

Sam Drake invents a suspended animation drug. After bank-depositing the single dollar he has left after paying his bills, he goes to sleep for a thousand years. Waking up in his miraculously still-intact basement in clothes that are still in perfect condition, he goes to the bank and retrieves his now $250,000 balance. Worried about changing monetary values, Sam tells the bank manager to invest his money in gold and goes to sleep for another thousand years, only to wake up in a world where gold is now common due to a cosmic accident.

Appearing in "The Human Magnet"Edit

Synopsis for "The Human Magnet"Edit

Retrieved from "https://heykidscomics.fandom.com/wiki/Mystery_in_Space_Vol_1_12?oldid=1444014"
Community content is available under CC-BY-SA unless otherwise noted.