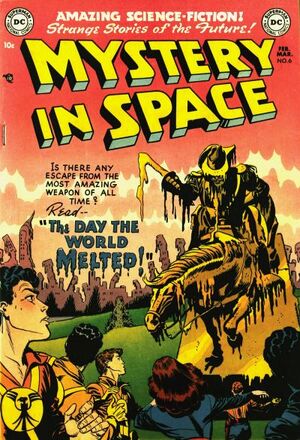 Appearing in "The Day the World Melted"Edit

Synopsis for "The Day the World Melted"Edit

The Master of Doom transports the Galaxy Knights back in time to the 20th Century while he attempts to conquer their own time, and Lyle and his men find themselves fighting to save Earth from nuclear devastation. Ultimately, the power of the H-Bomb they manage to detonate harmlessly in space gives them the energy needed to return home and defeat their nemesis.

Appearing in "The Boy Who Saved Earth"Edit

Synopsis for "The Boy Who Saved Earth"Edit

Synopsis for "Cowboy on Mars"Edit

The lead Knights of the Galaxy story is reprinted in JLA #91.

Retrieved from "https://heykidscomics.fandom.com/wiki/Mystery_in_Space_Vol_1_6?oldid=1444008"
Community content is available under CC-BY-SA unless otherwise noted.