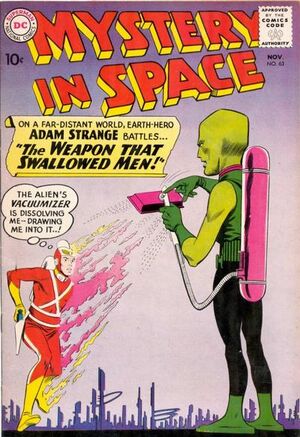 Appearing in "The Weapon That Swallowed Men!"Edit

Synopsis for "The Weapon That Swallowed Men!"Edit

Traveling to an equatorial jungle in Peru, Adam Strange rockets to ancient Incan ruins in order to intercept the Zeta-Beam that will transport him to Rann. Arriving on his adoptive home world he is greeted once more by Alanna. Adam asks Alanna to show him some ruins of a past civilization. Alanna takes Adam to the ruins of Sumuru. Their exploring is interrupted by a call from Ranagar City asking the two of them to return at once. Arriving there, one of the leaders of the city informs Adam Strange that aliens from another world have arrived and wish to meet a delegation of people, the leaders of Ranagar City have chosen Adam Strange to lead this delegation.

Meeting with the aliens, they reveal their intention: to take over Rann. When Adam, Alanna and an army attack the aliens they activate a device called a "vacuumizer" which literally sucks up everybody in their path, including Adam and Alanna. With the army defeated, the aliens deliver their ultimatum: surrender or die. The people of Ranagar City surrender.

All is not lost however, when the Zeta-Beam wears off Adam finds himself transported to Earth, alive and intact and begins to consider what to do when he travels next to Rann. Nine days later he transports himself back to Rann via the next Zeta-Beam and finds that the entire planet has been stripped bare. He soon finds Alanna, alive and well, who explains that after their defeat the aliens simply sucked up the cities on Rann and left the people to live like cavemen.

Deducing that when the aliens dissolved people their weapons were not dissolved, Adam realizes that the Vacuumizers have to be set on a certain setting in order to dissolve and absorb certain materials. He then begins training the people of Ranagar City in hand to hand combat and make outfits that are composed of different types of metal. They then all attack the aliens who are easily overpowered as they do not know how to fight. Once defeated the aliens surrender and agree to restore the cities they took and leave Rann without their Vaccumizers. After everything is restored, the Zeta-Beam wears off and Adam is returned to Earth once again.

Retrieved from "https://heykidscomics.fandom.com/wiki/Mystery_in_Space_Vol_1_63?oldid=1444065"
Community content is available under CC-BY-SA unless otherwise noted.