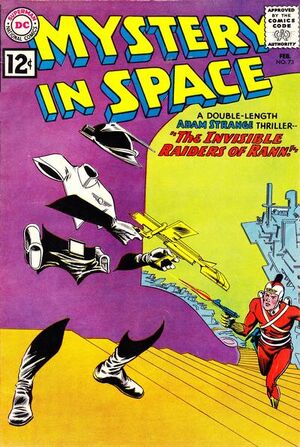 Appearing in "The Invisible Raiders of Rann!"Edit

Synopsis for "The Invisible Raiders of Rann!"Edit

Continuing from last issue, Adam Strange has only 10 minutes to reach the next Zeta-Beam that will transport him to the planet Rann. In doing so he has to intercept it over a rich diamond mine in South Africa, and succeeds in dodging a hail of bullets from the mines guards while intercepting the Zeta-Beam. There he is met by Alanna who greets him with a kiss, when they are finished Adam is shocked to see that Alanna has turned invisible (except for her clothing), and as suddenly as this transformation happens a ship appears ordering the people of Rann to surrender.

En rout to Ranagar, the ship beats them there and begins destroying the city and turning it's people invisible as well. However, the counter attack manages causes the ship to crash land. Suddenly from the ships wreckage, soldiers who are invisible under their uniforms attack, and the people of Rann are unable to stop them with their weapons. Adam manages to corner one of the invaders, and knocks away it's weapon and tackles it. The uniform crumples to the ground, and Adam realizes that perhaps it was all a ruse and the being they're really fighting might be manipulating things from inside the crashed ship still.

Traveling to the crashed shuttle, Adam and Alanna enter and find an energy being inside. The being introduces itself as Ziathrion from the planet Karthal. It explains that it was the greatest scientist on it's world and used it's power to attempt to take over it's world. But the beings people soon combined their powers and removed the core of syntheti-matter that contains Ziathrion's great power. The beings of Karthal then burried the syntheti-matter on Rann and imprisoned Ziathrion. Ziathrion soon escaped and stole a ship and came to Rann to recover the syntheti-matter and used his "invisible soldier" invasion as a smokescreen to retrieve the syntheti-matter. Now immune all weapons, Ziatharion boasts his regained power by offering Adam Strange a futile attempt at trying to stop him. When no other weapons work, Adam suddenly jumps and grabs Ziatharion, just then the Zeta-Beam wears off and the two are transported to Earth.

Retrieved from "https://heykidscomics.fandom.com/wiki/Mystery_in_Space_Vol_1_73?oldid=1444075"
Community content is available under CC-BY-SA unless otherwise noted.