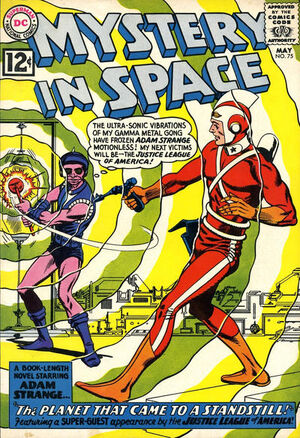 Appearing in "The Planet That Came to a Standstill"Edit

Synopsis for "The Planet That Came to a Standstill"Edit

On the planet Earth, honorary Justice League member Snapper Carr, records his recollection of the Justice League of America's battle against Kanjar Ro, Hyathis, Kromm and Sayyar (as it occurred in Justice League of America #3) Where the JLA had created a prison planet for the four evil aliens following their defeat. On the prison planet the four aliens continue to attempt to break the barrier around the planet created by the Green Lantern's power ring. Noticing a crack in the forcefield, Kanjar Ro uses his wand to fly up and through the crack leaving his three former partners behind. Recreating his Cosmic Ship to escape and plot his revenge against the Justice League. Inspired by the fact that Superman's powers are derived from Earth's low gravity and yellow sun, Kanjar decides to find a world that is powered by three yellow sun's predicting that it would make him more powerful than Superman himself.

Meanwhile, on the planet Rann, Alanna has taken Adam Strange to see the "Aurora Borealis" of Rann, and talk about how Adam managed to find a way to remain on Rann indefinitely (as depicted last issue.) Days later after completing their research they head back to the planet Rann where they notice a group of men flying giant birds over the city of Ranagar. Alanna recognizes them as Zooran Barbarians, and the two notice that they are in some sort of trance. One of the Zooran's uses a small bell that once hit, causes sounds waves that send Adam and Alanna shooting into the outer atmosphere of Rann, where they are stuck in a perpetual orbit.

Trapped in orbit, the two adventurers manage to reverse the effects of the bell by positioning themselves to pass through the "Borealis" they were studying before, and are able to crash land back on Rann. Returning to the city of Ranagar where they meet with Alanna's father Sardath. Sardath informs them that the Zooran's are using the bell to take mental control of the people of neighboring cities. Using ear plugs, Adam and Alanna attempt to find out what is going on and pretend to be taken under control of the Zooran's to follow where all the other slaves are being led to.

They are brought to the ruins of Vardana where Kanjar Ro has setup a laboratory where he has created a device that will bombard him with radiation from Ran's three suns giving him strength and speed greater than Superman and the Flash. He puts the slaves to work to perfect the device, little knowing that two of them aren't really under his control but are learning everything they can to stop him. Several days later, Kanjar uses the device again and tests his new-found strength on duplicates of the entire Justice League, defeating them all easily.

That night, Adam attempts to destroy Kanjar Ro's machine, but is soon discovered and Kanjar immobilizes him with his Gamma Gong, Alanna is captured soon after as well. Kanjar then traps them in a gravity-prison that will keep both Adam and Alanna fixed in chairs unable to move a finger unless they are given food to eat. At meal time, Adam and Alanna attempt to shut off the device by throwing their empty meal plates at the gravity-prison's switch. When Alanna's first throw misses, Adam's throw increases the gravity exponentially. Their increased weight causing them to crash through the floor, freeing themselves from the prison. Sending Alanna back to Ranagar, Adam steals Kanjar Ro's Cosmic Ship and travels to Earth, in hopes of intercepting the next Zeta-Beam in time.

Arriving on Earth, Adam leaves the Cosmic Ship in an ancient city hidden in the jungles of Zambabwe, Africa. Adam then uses the Zeta-Beam to return to Rann once more. A short time later, the Flash speeds through Africa, returning from a visit to Gorilla City, on his way back he comes across the Cosmic Ship. Suspicious, he calls the rest of the Justice League and Batman, Wonder Woman, Green Lantern, Aquaman, Martian Manhunter, and Snapper Carr arrive to investigate. The JLA members decide that they should go to the prison planet to investigate the matter further.

Back on Rann, Adam reunites with Alanna and the two plot to take control of Kanjar Ro's Gamm Gong, while on the prison planet, the Green Lantern, Batman and Martian Manhunter learn that Kanjar Ro has escaped and are told by the other prisoners that Kanjar always talked of getting super-powers from a three-star system. They then leave the prison planet signaling the other JLA members back on Earth that they are going to Rann to stop Kanjar Ro. While back on Rann, Adam Strange and Alanna find Kanjar's Gamma Gong and Adam uses it to immobilize everybody on Rann. Just then the Zeta-Beam wears off and Adam is returned to Earth where he meets up with the Justice League, and introduces himself.

Quickly explaining the situation to Wonder Woman, Flash, Aquaman and Snapper, they all take the Cosmic Ship to Rann, where they find that Batman, Martian Manhunter, and Green Lantern have been immobilized as well. Adam secures Kanjar's supersonic whistle and uses it to free Alanna, and the frozen JLA members. Kanjar Ro attacks Adam Strange and the JLA members, and the group cannot cope with Kanjar's new super-powers and soon they are all beaten to a stand still by Kanjar's might. Kanjar then starts using a anti-evolution ray on Batman, Aquaman and Snapper Carr reverting them into pre-historic cavemen. Adam manages to stop Kanjar by throwing Kanjar's own Energi-Rod at the villain as he is being struck by one of Ro's yellow energy beams. The rod strikes Kanjar and knocks him out instantly. With Ro defeated, Green Lantern uses his power ring to change his comrades back to normal.

Adam explains to everyone that he surmised that since Superman's weakness was Kryptonite which originates from his home planet of Krypton, then a metal native to Kanjar Ro's home world of Dhor would effect him in the same way, and that Kanjar's own Enegi-Rod was made out of Dohrite.

Suddenly Adam does not feel so well and has a doctor in Ranagar look at him. The doctor explains that exposure to Kanjar's energy beam had an effect on Adam that makes it impossible for him to survive on Rann for longer than a year and that he can only stay for short visits. Adam then leaves with the Justice League to return to Earth, planning to use the next Zeta-Beam to return to Rann once again, and resume his short visits to Rann.

Retrieved from "https://heykidscomics.fandom.com/wiki/Mystery_in_Space_Vol_1_75?oldid=1444077"
Community content is available under CC-BY-SA unless otherwise noted.