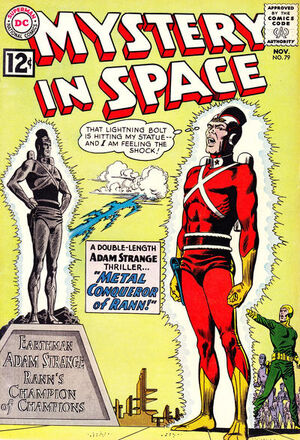 Appearing in "The Metal Conquerer Of Rann!"Edit

Synopsis for "The Metal Conquerer Of Rann!"Edit

Waiting for Adam's next scheduled arrival on the planet Rann, Alanna notices that Adam's landing place is over dangerous quicksand and so she puts boards over the pit. Just as Adam is arriving via the Zeta-Beam, Alanna is struck by a strange energy and Adam arrives only to see Alanna disappear right before his eyes. Flying to Ranagar, Adam asks Alanna's father Sardath if he knows what could have happened. Sardath is just as much at a loss to explain what happened as well, and their pondering is interrupted by a cheering crowd. Sardath shows Adam that Alanna had prepared a statue commemorating Adam as the champion of Rann. Just then a bolt of lightning strikes the statue, and it's jolt is felt by Adam who also suddenly disappears.

As people wonder what happened, suddenly the statue begins to talk, it introduces itself as Ikhar the Undying and that it plans to take over the planet Rann through occupation of the Adam Strange statue. He explains that after kidnapping Alanna he learned that Rann's only champion was Adam Strange and facilitated his removal from the planet, and that he an Alanna have been turned into petrified statues and stored in his ship thousands of light years away. With his explanation finished he then begins to terrorize the city, he surmises that when the Zeta-Beam wears off Adam will either be sent into oblivion or be returned to Earth as a lifeless statue.

While aboard Ikhar's ship, suddenly Adam turns back to normal, and he realizes it's the Zeta-Beam radiation that made the effect of Ikhar's petrification temporary. Finding that he doesn't recognize the area of space that he's in Adam fears that when he returns to Earth, Alanna will be lost to him in space forever. Suddenly Adam remembers that he can transport inanimate objects with him when the Zeta-Beam wears off, and hopes that since Alanna is petrified he might be able to bring her to Earth with him, as the Zeta-Beam wears off, Adam grabs onto Alanna's petrified body tightly.

The ploy works and the two are transported back to Earth where Adam travels to the location of the next Zeta-Beam and he and Alanna's body are transported back to Rann. Adam leaves Alanna's body behind while he goes off to battle Ikhar. The battle rages and each time Ikhar takes on a new shape, possessing a building, a glassy spire, lava, fire and then finally Adam's own ray-gun. But this is where Adam has tricked Ikhar, and had him possessed only a facsimile of his ray-gun made out of charcoal. Trapped in something that was once alive, Ikhar begins to lose his power and is at risk of death.

Adam strikes Ikhar a deal, if he restores Alanna to life he'll free Ikhar from his lethal prison, at first attempting to lie, Adam sees through it and forces Ikhar to help him. They build a device that will restore Alanna to normal and remove the Zeta-Beam radiation from her body so that she will not be returned to Earth as an inert statue. With his promise kept, Adam allows Ikhar to leave.

After, Adam explains how he manages to know Ikhar was lying due to pulsations from the fake ray-gun like a lie-detector test, and that he tricked Ikhar into believing that the ray-gun was real by having a miniature version of his ray-gun hidden under the sleeve of his shirt. With his explanations made, Alanna kisses Adam and Sardath leaves the two young people to romance in private.

Retrieved from "https://heykidscomics.fandom.com/wiki/Mystery_in_Space_Vol_1_79?oldid=1444081"
Community content is available under CC-BY-SA unless otherwise noted.