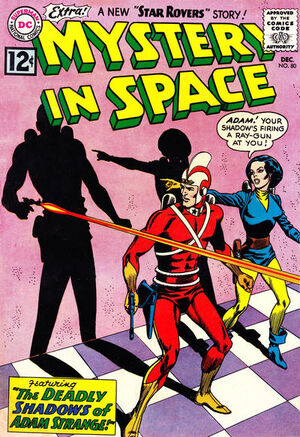 Appearing in "The Deadly Shadows of Adam Strange!"Edit

Synopsis for "The Deadly Shadows of Adam Strange!"Edit

Continuing from last issue, Sardath is leaving Alanna and Adam alone to their privacy, as he closes the door behind him he is attacked by a mysterious kidnapper. Hearing Sardath's scream, Alanna and Adam chase after the kidnappers ship when at that moment Adam's Zeta-Beam wears off and he is returned to Earth. Adam travels to Zambebwe to be near the location of the next Zeta-Beam, and keeps himself occupied with his study of local ruins. However, several days later Adam is stricken with a jungle illness and passes out, he is taken to a village near Nairobi by some natives. He later recovers in a hospital and is discharged and makes it to Melbourne, Australia in order to catch the next Zeta-Beam. He manages to catch is successfully and is transported back to Rann where Alanna is waiting for him.

Informing Adam that she has not found her father yet, she and Adam continue the search, investigating the report that the flier that kidnapped Alanna's father had crashed in a crater that used to be the city of Alkamar. Searching the crater, Adam is attacked and knocked over the edge by his own shadow and only the quick action of Alanna saves him from a quick death. Recovering they continue their search, little knowing that Sardath had escaped his captors and returned to Ranagar to warn Adam of a terrible danger waiting for him in the ruins of Alkamar.

In the ruins, Adam is once again attacked by his shadow, this time managing to avoid getting shot by it. Dissipating the shadow, Adam figures some form of radiation caused his shadow to come to life and so he and Alanna take part of the wall back for examination in Ranagar. There they find Sardath alive and well, who tells them that he was captured by Mortan who orchestrated a plot to lure Adam Strange into a trap where he would use Adam's own shadow to destroy him.

Learning that Mortan was using Pi-Radiation to make his shadow come to life he examines the wall and learns the Pi-Crystals when exposed to light render somebody invisible, with this knowledge, Adam goes to Mortan's hideout to confront the foe. Mortan is waiting for him and traps Adam in a room where his shadow is projected on every wall. After dodging shots from his shadow attackers, Adam uses the Pi-Crystals to make himself invisible. Shocked that Adam suddenly disappeared, Mortan enters the room to investigate, allowing Adam to stun and capture him.

With Mortan once again defeated and confined to a cell, Adam and Alanna decide to pick up where they left off at the beginning of the adventure: kissing each other.

Appearing in "Who Saved the Earth?"Edit

Synopsis for "Who Saved the Earth?"Edit

Each of the Rovers receive a telegram, informing them that they will be presented with awards for saving Earth. Not understanding why they're each getting a space-hero medal, they make a conference call to one another and reminisce over past accomplishments. After comparing stories, each understand how they unintentionally saved the planet, and some days later go to the ceremonies together.

Retrieved from "https://heykidscomics.fandom.com/wiki/Mystery_in_Space_Vol_1_80?oldid=1444082"
Community content is available under CC-BY-SA unless otherwise noted.