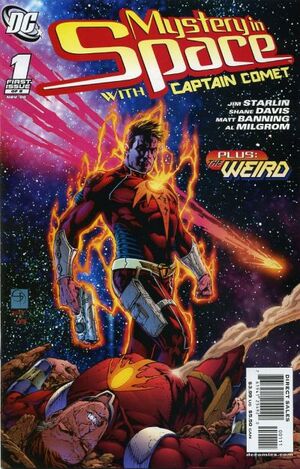 Awful as this fix was, desperation didn't rear its ugly head. This was nowhere near as bad as it could get. You see, two hours earlier I had been dead.

Telepathic agents from Hardcore Station discover freelance agent Captain Comet and attack him. They manage to slip a psychic restraint over his head which overloads the neurons of his body. Unsure of how to handle the situation any further, they decide to destroy him. Captain Comet is launched into the heart of a sun, which quickly consumes his body. However, the telepathic energy of his mind survives the body's destruction and wanders the cosmos until it finds a new physical host.

Meanwhile, a yellow-skinned woman known as Eye arrives at Captain Comet's apartment on Hardcore Station. A talking bulldog named Tyrone greets her, and invites her inside. He tell her about Comet's life both as an Earth adventurer of the 1950s, and as an interstellar hero. After Eye leaves, Tyrone hears a noise from an adjacent room. Entering it, he sees Captain Comet's prone body sprawled out across the floor.

Appearing in "The Weird: Revivification"Edit

Synopsis for "The Weird: Revivification"Edit

The Zarolatt entity known as the Weird, slowly reconstitutes a new form after living as a disembodied energy being for so long. He recalls his species' long-standing feud with the more powerful Macrolatt aliens, and his discovery of the Milky Way Galaxy. He further remembers his first physical host body – that of an aging Earth human named Walter Langley. As the Weird, Langley briefly associated with the Justice League in order to combat his Macrolatt oppressors.

Now that the Weird is alive again, he tests out all of his superhuman capabilities and flies off to investigate his surroundings. He quickly realizes that he is no longer on Earth.

Retrieved from "https://heykidscomics.fandom.com/wiki/Mystery_in_Space_Vol_2_1?oldid=1474734"
Community content is available under CC-BY-SA unless otherwise noted.