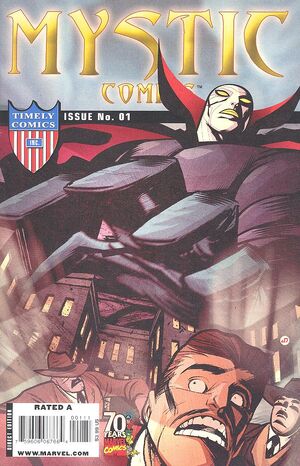 “I am the destroyer of evil,” the haunting stranger intoned; “I’ve crossed the great cold into your world!” So speaks the original Vision! From a dimension beyond, comes an otherworldly force of retribution. His steely touch turns killers to ice, shattering them. His staggering gaze drives the guilty mad with terror. His unstoppable power never fails to punish the wicked! It is said only those approaching death can see him in his true form as…the Vision!

Retrieved from "https://heykidscomics.fandom.com/wiki/Mystic_Comics_70th_Anniversary_Special_Vol_1_1?oldid=1447503"
Community content is available under CC-BY-SA unless otherwise noted.