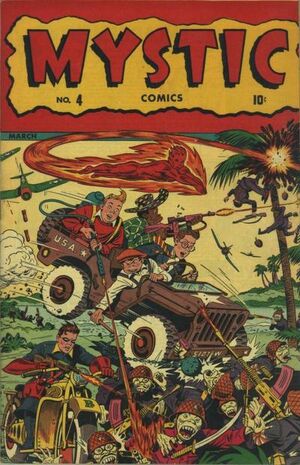 Appearing in "The Walking Dead"Edit

Synopsis for "The Walking Dead"Edit

Criminal Killer Bane is on the run from the police and ducks down a nearby alley. There he spots a kid hiding and attempts to use the lad as a hostage to escape the authorities. He manages to get away from the cops and climb up onto a roof top, threatening to kill his hostage if anyone should try to interfere with his escape. Passing by, the Young Allies witness the situation and decide to try an help save the boy. Rushing up to the roof of the building the Young Allies distract Killer Bane long enough for Toro to use his flame powers to scorch Bane forcing him to let the boy go. With the hostage safe, the Young Allies then pile onto Killer Bane and beat him to a pulp before turning him over to the authorities.

Killer Bane is sentenced to death and is sent to the electric chair and executed. As he is being electrocuted, Bane vows to come back from the grave and get revenge against those who sent him to death row. After Bane's body is buried, the graveyard caretaker, Professor Malgus, digs up Killer Bane's remains and brings the corpse back to his secret laboratory. With a special serum, the caretaker brings Killer Bane back to life. When Killer Bane revives and learns what Professor Malgus had done, he then kills the scientist.

Soon Killer Bane begins a violent crime spree, as he is already dead nothing can harm him or cause him pane. When the Young Allies learn of the spree they attempt to stop him. When Toro gets too close, Bane uses his Tommy Gun to blast holes in the side of a fire truck that douse his flames and then flees the scene, taking Bucky and Toro captive. When the authorities arrive, the other Young Allies attempt to explain that Killer Bane was responsible, but nobody believes them.

Meanwhile, at his secret hideout, Killer Bane has bound up Bucky and Toro in a room that is slowly filling with water. While elsewhere, the Young Allies go to the graveyard where Killer Bane was buried to search for clues. Finding Bane's unearthed grave and footprints, the Allies follow them to the Bane's mansion hideout. Rushing inside, they find the deathtrap set for Bucky and Toro and free their comrades before they can drown. Attacking Killer Bane once more, the Young Allies lose him in the mansions various secret passages. With no leads on where to find Killer Bane, Bucky suggests they return the next day to search some more. While elsewhere in the mansion Killer Bane finds Professor Malgus' notes and decides to create an army of undead crooks to assist in his crime wave. He digs up the graves of three other killers: Strangler Carson, Monk Kain, and Lippy Dirk. Taking their bodies back to the lab, Killer Bane then uses the Professors formula to resurrect the three other killers.

The quartet of walking dead men then begin another wave of crimes which prompt the Young Allies to continue their hunt. Toro tracks the killers back to their mansion hideout where they clash once more. Realizing that fire is the killers only weakness, Toro sets the house ablaze and the Young Allies flee as Killer Bane and his gang are burned to death.

A Japanese submarine raises out of the water off the California coast. They are quickly spotted and captured by the Coast Guard and the Destroyer, to whom they quickly surrender. The Destroyer finds that the Japanese look strange as they are all extremely tall for their size and move around awkwardly. As they are searching the captured spies, one of them suddenly explodes taking out the soldiers and allowing the others to escape. Surviving the blast, the Destroy chases after the spies but loses track of them.

Searching around the area, the Destroyer finds one of the spies and attacks him. After capturing him, the Destroyer forces him to take him to his other minions and captures them. As the hero rounds up the spies he realizes that once stalky men are much shorter and their clothes no longer fit properly. He turns them over to the authorities and then begins investigating why the spies suddenly changed height. Searching their hideout, he finds a part of a newspaper with an article on a captured Nazi buzz bomb ramp that had been captured by the Allies in Europe and was being put on display at a War Bond collection drive in Los Angeles.

Rushing to the stadium, the Destroyer warns the authorities and they begin searching the area for the spies, finding some dead guards on the scene. Realizing that the bomb has already been set in the buzz bomber. The Destroy hops on the device and launches it. Flying it out to sea, the Destroyer spots a Japanese sub and sends the bomber crashing into it. The Destroyer bails out at the last minute and lands safely as the Nazi buzz-bomber blows up the Japanese sub.

Appearing in "The Voice Beyond the Grave"Edit

Synopsis for "The Voice Beyond the Grave"Edit

Detective Mike Trapp and Pepper Burns are sent to investigate the missing Jim Cobb. They begin their search at the home that Cobb shared with his wife. Arriving at the driveway, noticing that it is covered with cinders, Mike picks up what Pepper believes to be a pebble.

Retrieved from "https://heykidscomics.fandom.com/wiki/Mystic_Comics_Vol_2_4?oldid=1471118"
Community content is available under CC-BY-SA unless otherwise noted.