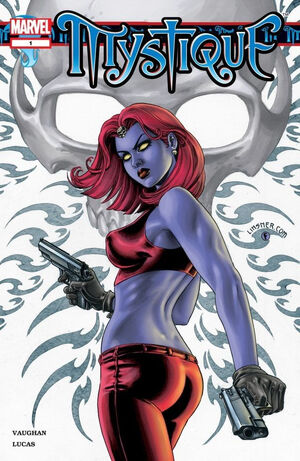 There's a reason why my people call her kind tricksters. Raven Darkholme may be able to alter her appearance a million times a day... but she never really changes.

The beautiful blonde Prudence (a.k.a Agent 16) runs from a pyrokinetic arms dealer who covets a stolen data disc in her possession. A short fight ensues ending with her opponent, known only as Steinbeck, mercilessly incinerating the flesh from her bones. At the Xavier Institute, a televised interview with the Professor is cut short when Charles receives a telepathic message from Shortpack. The Professor is beside himself when the field handler informs him that his charge has been murdered. In the early hours of the morning, there is a knock at Forge's door. Charles enters and discloses to him a covert, politically sensitive operation under his command. The legendary mutant requires a new agent to finish Prudence's assignment... He needs the master of disguise and espionage, Mystique. A few hours later, in a Westlake apartment complex, Dr. Connolley invites an appointed call girl into his work-station/home. The attractive red-head tries to persuade the scientist to show her some of his equipment, but when he refuses, she holds him at gunpoint. She then exposes a hidden safe behind a picture frame and demands that the scientist tell her the combination. The man suddenly morphs into Mystique, who swiftly turns the table on her assailant. Mystique also manages to squeeze information out of the amateur spy concerning a device that will help locate shapeshifters. She however finds nothing in the safe and allows the girl to escape; but is soon surrounded by well-armed DHS officers.

Retrieved from "https://heykidscomics.fandom.com/wiki/Mystique_Vol_1_1?oldid=1518217"
Community content is available under CC-BY-SA unless otherwise noted.