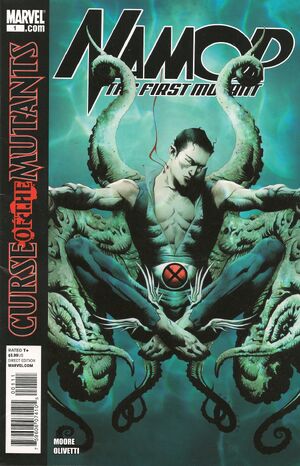 Vampire squid. Should have seen that coming.

Spinning out of the pages of X-MEN #1, comes an all-new series starring the world’s first mutant, NAMOR THE SUB-MARINER. When the X-Men are confronted with a deadly vampire threat, Namor takes matters into his own hands on a mission that might bring down the entire might of the vampires on their heads…and in the process, destroy Atlantis! What lurks down below the ocean where the sun can’t reach? What he thought was a fable to scare the children of Atlantis comes to terrifying life in the form of a newly-discovered race of Atlantean Vampires. Namor’s choice, to stand with Atlantis or the X-Men, will define a new chapter in his life…or death.

Retrieved from "https://heykidscomics.fandom.com/wiki/Namor:_The_First_Mutant_Vol_1_1?oldid=1511464"
Community content is available under CC-BY-SA unless otherwise noted.