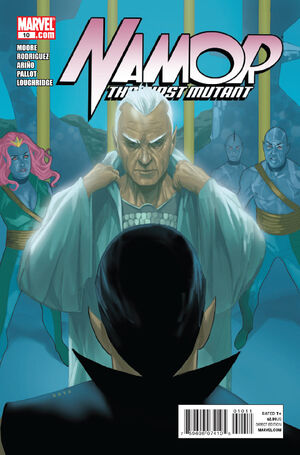 It's too late, Krang. I've done what you were too weak to accomplish! It's begun! And there's no stopping it. Not even the mighty Prince Namor can outrace the Burrower. Say good-bye to this weak little faerie kingdom. And prepare for the new age of warrior Atlantis!

Appearing in "Fire Down Below (Part 2)"Edit

"The Fire Down Below" continues! After last issue's shocking death, Namor sets out for revenge against Commander Krang and his lackey, Selach. But as Selach prepares to destroy both New Atlantis and the X-Men's island Utopia, Namor must accept help from an unexpected ally. The wild card: a mysterious cloaked figure who knows an awful lot about Namor. But who is he?

Retrieved from "https://heykidscomics.fandom.com/wiki/Namor:_The_First_Mutant_Vol_1_10?oldid=1488960"
Community content is available under CC-BY-SA unless otherwise noted.