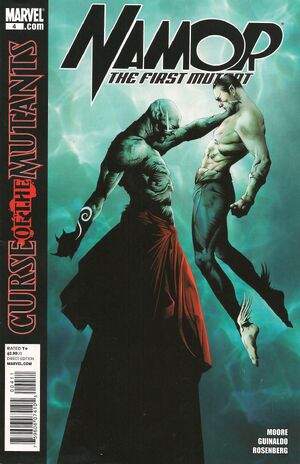 Unlike my predecessors, Loa, I can no longer neglect matters beyond the walls of Atlantis. The era of emperors is gone. It's time to make something new. I have a kingdom to build, battles to fight. And a life I intend to live to the fullest. But like you, I will first pause to consider what has happened today. All that I have learned...and all that's been lost.

"Royal Blood" concludes! In the dark, hidden city of the underwater vampires, Namor fights the Highlord for the survival of the Atlantean people! But once he knows the vamp's secret, can Namor bring himself to finish the job? A turning point for Marvel's first mutant, guest-starring the X-Men!

Retrieved from "https://heykidscomics.fandom.com/wiki/Namor:_The_First_Mutant_Vol_1_4?oldid=1447619"
Community content is available under CC-BY-SA unless otherwise noted.