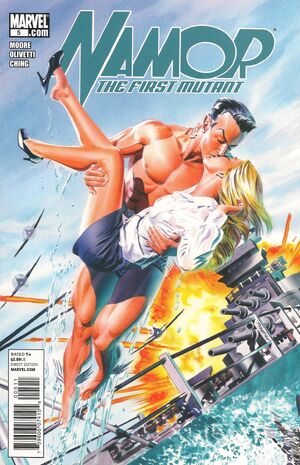 A special issue showcasing the different sides of Prince Namor: proud king, valiant hero—and arrogant, unfaithful lover. Years ago, when Namor was young, he fell in love with a surface woman, only to break her heart. But what is her connection to the new generation of X-Men? A stand-alone story that sets the stage for an unexpected new NAMOR storyline!

Retrieved from "https://heykidscomics.fandom.com/wiki/Namor:_The_First_Mutant_Vol_1_5?oldid=1447620"
Community content is available under CC-BY-SA unless otherwise noted.