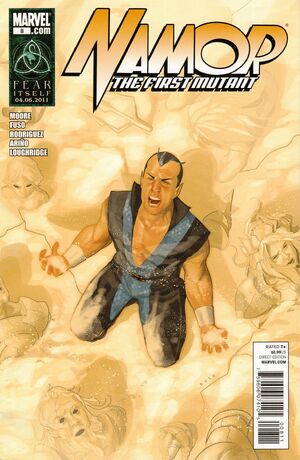 NAMOR GOES TO HELL concludes! Abandoned by his greatest ally, Namor finds his escape from the desert netherworld blocked by an army of demonic creatures. To regain his humanity, the King of Atlantis will have to overcome his deepest inner fears -- and that's nothing compared to the shock waiting for him back on Earth.

Retrieved from "https://heykidscomics.fandom.com/wiki/Namor:_The_First_Mutant_Vol_1_8?oldid=1643207"
Community content is available under CC-BY-SA unless otherwise noted.