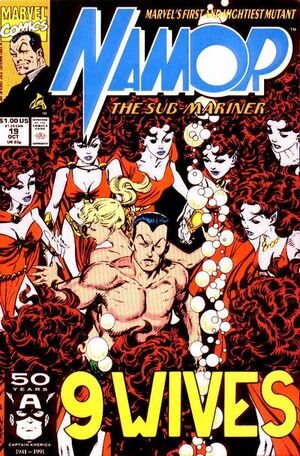 Give it up, Marrs. You played the most dangerous game, and you lost. Take your punishment like a man!

Jacqueline Falsworth is looking at an old golden age comic featuring the Sub-Mariner. She is shocked at the racism and the way Germans and Japanese were portrayed in comics at that time. She notes an "amazing number of inaccuracies in them". Next she re-examines her new youthful restoration and decides to try some of Namorita's fashion on. Outfitted with a short, form-fitting dress from the era her phones rings and tells her of an emergency at Oracle.

When Jacqueline arrives at Oracle, she discovers Caleb Alexander unconscious and bleeding in Desmond Marrs office. She calls for medical help as well as Namor. Namor is still in the Savage Land. He decides use his Atlantean Flagship and drop Phoebe Marrs, Misty Knight, and Carrie Alexander back in New York City. However, he and Namorita return to Atlantis to investigate the appearance of a Lady Dorma clone.

In Atlantis, he and Namorita decide to investigate the Boundary Trench where Dorma was buried. They finds a unique underwater lab and its owner, Vyrra. Vyrra had been banished from Atlantis when Namor was a child. However, he had hoped that his gift of restoring a clone on Dorma would allow Prince Namor to allow him to be buried in Atlantis. In fact, Vyrra had made multiple clones of Dorma.

In another storyline, a a mysterious man buys a new home. His real estate agent asks why he would want such a large green house. He demonstrates by showing her some rapidly growing plants which kill the agent.

Back in New York City, the Punisher is chasing Desmond Marrs down. Desmond pulls a pistol and shoots the Punisher, but his body armor protects him. Desomd decides to rob the Punisher of the opportunity to kill him, puts his pistol in his own mouth, and commits suicide.

Vyrra is sad that he could not recreate Dorma's unique personality. In the course of the conversation, he notes that Namorita was his greatest creation. And as Namorita looks on is shock, he reveals that Namorita is a clone of Namor's mother Namora.

Retrieved from "https://heykidscomics.fandom.com/wiki/Namor_the_Sub-Mariner_Vol_1_19?oldid=1447556"
Community content is available under CC-BY-SA unless otherwise noted.