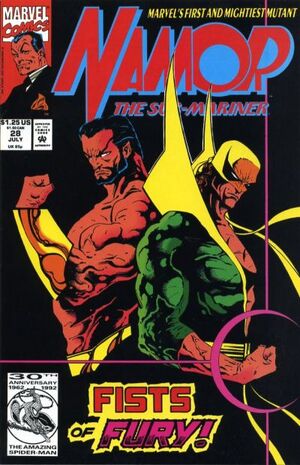 Takes alot more than this to keep an Atlantean down!

Appearing in "Still Alive and Well"Edit

Synopsis for "Still Alive and Well"Edit

Misty Knight and Colleen Wing are putting Iron Fist through a number of attacks in a simulated battle room. He is more than up to the test and appears to be back to his "vintage" Living Weapon form.

Out in the west, Namorita has survived the savage punch of Namor. She flies back to New York to inform her Oracle company to assist her with the situation with Namor. However, it is revealed that 'Rita's company Oracle is involved in the machinations at the Western mining camp between the loggers and the eco-terrorists.

Namor knows that their is something unrevealed about his new friend Tess Walker. However, he feels drawn to her. They embrace and kiss. Namor agrees to help Tess' eco-terrorist group against the loggers who are destroying the area with their harvesting. An attack takes place at night and the loggers respond in kind. Suddenly, another large machine emerges killing more than 10 of both the loggers and eco-terrorists alike. Namor investigates and finds out it is his "friend" Tess at the controls. Before he can question her, they topple into a flammable gas area of the camp. A violent explosion takes place. To Be Continued.

Retrieved from "https://heykidscomics.fandom.com/wiki/Namor_the_Sub-Mariner_Vol_1_28?oldid=1447565"
Community content is available under CC-BY-SA unless otherwise noted.