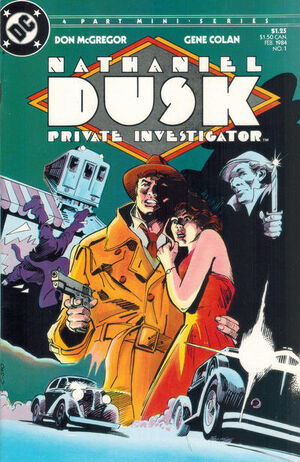 Appearing in "Lovers Die at Dusk"Edit

Synopsis for "Lovers Die at Dusk"Edit

January 31, 1934. P. I. Nathaniel Dusk leaves his office and heads to collect developing photographs, stopping briefly to chat with newspaper vendor Oscar Flam. Two thugs, Eddie "The Cadaver" Pichano and Willie "Big Mouth" Gugenheim, watch from their car. Dusk returns to his office and shows the photographs (depicting adultery) to his client, Mrs. Grant Morrison. Dusk’s girlfriend, Joyce Gulino, arrives and immediately recognizes the distraught look on Mrs. Morrison’s face. She tries to comfort but Mrs. Morrison storms out. Dusk and Joyce leave for drinks but the thugs follow. Gugenheim enters the same bar but Dusk had apparently spotted him each time and confronts him. They fight but Gugenheim escapes in the thugs’ car. Dusk and Joyce go to Joyce’s home where Dusk chats with Joyce’s kids while Joyce makes dinner. After the kids go to bed, Joyce and Dusk make love after which Dusk leaves. Dusk returns to his office where the thugs are waiting. Gugenheim calls “Blondie” telling him to “go to work.” The thugs then take Dusk at gunpoint to the top of the snow-covered Empire State Builsing and knock him over the edge.

Retrieved from "https://heykidscomics.fandom.com/wiki/Nathaniel_Dusk_Vol_1_1?oldid=1444128"
Community content is available under CC-BY-SA unless otherwise noted.