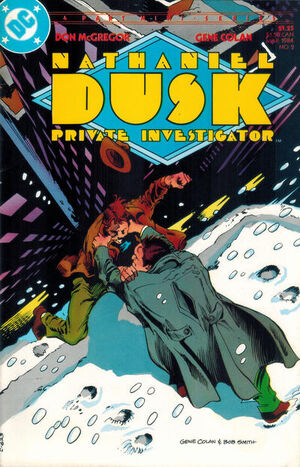 January 31, 1934: Nathaniel Dusk, pushed over the edge of the Empire State Building by thugs Eddie "The Cadaver" Pichano and Willie "Big Mouth" Gugenheim, manages to grab the ledge at the last second. Gugenheim tries to knock him over but Dusk grabs Gugenheim’s leg tripping him. He climbs as the two struggle while Pichano tries to get a clear shot. Dusk manages to get to a lower ledge and break through the window of an office where he calls futilely for Joyce’s landlady. The thugs go back inside and find the correct office, but Dusk escapes. He hails a cab, who tells him of a pending cab driver strike, and heads to Joyce’s apartment. She has been killed and the police, including Lt. Murray Abrahams, are already there.

February 1, 1934: At the police station, Dusk, sifting through wanted circulars, recognizes Pichano. Dusk has been unable to think of a client who wants him dead and begins to suspect he was targeted because he was seeing Joyce.

February 2, 1934: Dusk attends Joyce’s funeral where Jennie, Joyce’s daughter, asks Dusk if he loved Joyce. Dusk doesn’t have an answer. He spots Arthur Squire and wants to know about Joyce’s life prior to Dusk’s dating of her, but he refuses to talk. Dusk returns to his office and drinks scotch, remembering Joyce, when Squire calls and asks to meet. Dusk leaves, pausing to chat with Oscar Flam and ask him if he knows Arthur Squire. Dusk continues to Squire’s place only to find him murdered and the thugs waiting for him. Dusk flees but the thugs follow. They board a train and Dusk tries to hide on the roof of a car but Gugenheim spots him.

Retrieved from "https://heykidscomics.fandom.com/wiki/Nathaniel_Dusk_Vol_1_2?oldid=1444129"
Community content is available under CC-BY-SA unless otherwise noted.