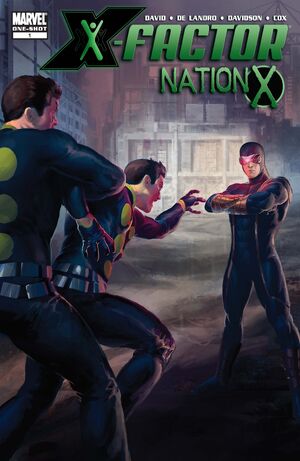 Appearing in "A Tale of Two Islands"Edit

Utopia. The sanctuary for mutants to escape a world that wants them extinct. So is it the ideal home for X-Factor? That's what Cyclops believes when he invites the world's only mutant detective agency to relocate to their floating island retreat and take up residence there. But will Madrox and his team believe that it's the best place for them? What old faces will pop up, and what old acquaintances will be renewed? And will there even be a Utopia left when the mysterious Crone shows up and threatens to bring the entire place crashing down into the Pacific?

Retrieved from "https://heykidscomics.fandom.com/wiki/Nation_X:_X-Factor_Vol_1_1?oldid=1765317"
Community content is available under CC-BY-SA unless otherwise noted.