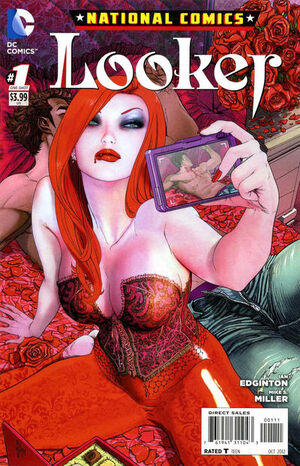 Son of a bitch! This was couture!

Emily Briggs is a vampire, but before that, she was a supermodel. Unfortunately, the need to remain out of the sun as a result of her turning, put an early end to that career. So, she became the reclusive owner of a modelling agency, blaming her retirement on a rare stream of lupus. Tonight, she is attending a showcase of Rhodes Royce's designs, observing the sort of person who attends this kind of function with some disgust. Tonight, though, something has gone wrong.

Her personal assistant Roma calls her backstage, and explains that two of the models they represent, Esther and Siren, have disappeared. Siren was older, and generally flaky. Esther, on the other hand, was smart - a young up and comer. This was her big break, and going off with Siren was a mistake. However, their purses were left behind in the dressing room, which suggests that they were taken against their will.

Rhodes explains that he had to pay through the nose to get Siren out of rehab for this runway show, and when Roma discovers residue from some kind of drug, they can see she was not ready to leave yet. Emily investigates further, and determines that the drug is cocaine mixed with something else - blood. Surreptitiously, she tastes it, and immediately is flooded with mental images of a large number of women, all of whom scream that they were murdered. The shock of the experience causes Emily to collapse.

She wakes in her apartment, two days later. Her assistant Charles greets her with a cup of warm blood. Roma had smoothed things over by telling witnesses that the collapse was a relapse of the lupus. Emily explains that she recognized some of the women she saw in her vision as actresses and models who had apparently committed suicide, according to the official stories. Roma reveals that Siren has just joined them, as her body was found murdered and mutilated in the river yesterday. Emily worries that Esther will face the same fate, and blames her for getting involved with Siren's messy life. Her attitude insults Roma and Charles, who leave the room coldly.

Emily notes that being undead doesn't stop her from being a bitch. She had been like that long before she was turned, though. She would gossip and lie in order to destroy her competition, and she rose to the top by climbing over them. After she was turned, she started her own modelling agency called Looker, but had difficulty running it without dealing with the baggage of vampirism. That was until she met Roma. The girl had been attacked by a Russian thug, and Emily saved her by draining him. Rather than kill the witness, Emily decided to hire Roma as her assistant. It turned out that Roma was a business student who was doing modelling to pay her tuition. Charles had discovered a renowned photographer's dirty side-habit, and ended up getting attacked. Emily had saved him too. The pair of them take care of Emily's day-to-day business, while she deals with the night work.

That night, Emily sneaks into her neighbour's apartment through the window, and catches him carving a sculpture. He hears her coming in, reminding her that there is a door. Paul is a former police officer, who now does freelance sculpture in his spare time, so long as the proceeds go to charity. Paul is also blind. Still, he knows what she's there for. She wants him to ask around with his buddies to find out something about Esther's disappearance. He agrees to help, and expresses hope that one day, she will model for him again. She allows him to touch her face; a reminder of what she looks like. Unexpectedly, she is drawn to kiss him, but suddenly she pulls away, apologizing. Before she leaves, he makes her promise not to do anything crazy until he finds out something.

Emily knows that Siren was an elitist who would only go to one supplier for her drugs: Perfect George. She finds him already beaten up, and his apartment ransacked. Before he dies of his injuries, he explains that a strange man gave him the cocaine to give to Siren, claiming to be a secret admirer. His name was Simon Glass.

Emily has heard of Simon Glass. A rich excentric; an art collector. In one room of his large house, she discovers Esther lying on a fainting couch, but she seems to be in a trance. Simon Glass welcomes her from across the room, claiming to be a great admirer of her work. Emily realizes that it was his blood in the cocaine, and he admits that Siren was his objective, while Esther had been a positive bonus.

He is an incubus, and he has killed one or two supermodels and actresses on an annual basis, going uncaught for all this time. He reveals that creatures like he and Emily are merely small parts of a greater ecosystem of strange supernatural creatures - and given that he hasn't tasted vampire in some time, this will be a treat for him. He pins her on the floor, and with a horrible sucking appendage, begins trying to consume her blood. She kicks him away, and with a thrust of her arm, she rips his heart out with her bear hand. As he dies, he warns that he knows who turned her.

Esther wakes, suddenly, and is surprised to see Emily there. Emily claims that the mess left by Simon Glass is merely a hallucination brought on by the drugs, and leads the girl out of the building before setting it on fire.

Back home, Emily explains that she will find the man who turned her on her own time, and then wonders what her assistants will be doing that night. Roma explains that they have been obligated to hold another Rhodes Royce show, which her company will be paying for, in order to keep him quiet about having seen her.

Emily intends to stay in, but Charles suggests that she attend a one-man art show, for which she received a personal invitation. He points out that it has a very exclusive guest list. Emily opens the envelope, and discovers a key to Paul's apartment inside.

Retrieved from "https://heykidscomics.fandom.com/wiki/National_Comics:_Looker_Vol_1_1?oldid=1455430"
Community content is available under CC-BY-SA unless otherwise noted.