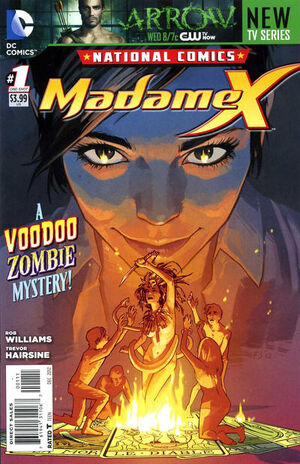 Magic can be a bitch.

Nima was once a Hollywood stage clairvoyant by the name of Madame X. Now, she keeps a day job as a full-time psychic with a local law firm. One night, she uses her Tarot cards to witness the murder of New Orleans city councillor Ben Meachum by what appears to be some kind of zombie. What little she can see indicates that it is some kind of Voodoo killing. The final image she sees is that of a woman, adorned in Voodoo decorations, and wielding a knife. When the phone rings, she already knows that it's work, and what it's about.

Mr. Lynn is the prominent lawyer who hired her to his firm, and though he is notoriously militant about office dress, he likes her enough to overlook the massive coffee stain on her blouse. Her coworker Salinger playfully jokes that she ought to have seen that coming.

At work, Mr. Linn introduces Nima to their potential new client, Ms. Lauren Goucuff, the self-proclaimed Voodoo Queen of New Orleans. Nima is shocked. This is the same woman she saw in her vision, if a little more fashionably attired. With little affect, Ms. Goucuff announces that they shall defend her, as sometime later she will be arrested for the murder of Ben Meachum, a crime of which she is innocent. She had threatened him publicly, placing a Voodoo curse on him, dousing he and his wife in blood. Naturally, she would be a suspect.

She had threatened him because Meachum had been crusading against she and her Voodoo followers as a ploy to win his bid for mayor. He had tried to humiliate her by bringing up her personal history during a televised debate with her. He had mocked her religion. In response, she mailed him a heavily cursed Voodoo knife; a statement of her intent. Despite the lack of enthusiasm on Salinger's part, Ms. Goucuff explains that she chose this firm, because she wanted to meet Nima - a sister in magic.

She comments that it must have been hard to lose the stardom she once had. She had many followers. It was only when a billionaire sued her after she accurately predicted a robbery on his home that she fell from grace. Somehow, she had not foreseen that he would ruin her career in that way.

Annoyed, Nima takes out her cards, and offers to show Ms. Goucuff some real magic. She reads that Ms. Goucuff wants to be the Voodoo Queen of New Orleans too badly. It hasn't come to her naturally. Her relationship with Meachum is not as antagonistic as Ms. Goucuff claims. His attacks brought her a certain amount of fame, which she enjoyed. As such, she is terrified that with his death, her own celebrity will die as well. Angrily, Ms. Goucuff tells Nima to stop, reminding that the accuracy of her power should allow her to see that she did not kill Meachum - a fact that Nima must concede.

Not long after their meeting, Ms. Goucuff is arrested. Salinger hopes that, given the fact that the jury will see it as an open and shut case, that Nima and he can prove her innocent, somehow. nima doesn't believe in zombies, despite her life of magic. They head to Meachum's house and ask around about witnesses. The policeman on duty claims that the neighbours saw something - but what they say they saw sounds insane. The neighbour insists that he saw a zombie, despite the obvious lack of belief on the part of Salinger and the cop, but to give him some comfort, Nima reveals details about the zombie that she saw in the vision.

On the way to the prison to question Ms. Goucuff, Salinger grumbles about the fact that Nima didn't tell him about the zombie she saw. She responds that it was because she didn't - and still doesn't - believe in zombies or Voodoo.

At the prison, Nima asks to be alone with Ms. Goucuff, and explains that she doesn't believe that the prisoner has any magic at all, but warns that she has plenty. She places a card on the bench between them, and wonders what the future will hold for Ms. Goucuff if she doesn't tell them where the secret Voodoo commune she leads is hiding, so that they can question them. Ms. Goucuff is on death row, and her future would be grim if she was convicted. Rather than let Nima turn the card over, and read that future, she tells her everything.

Nima and Salinger get a boat ride to the swamp location they were given, realizing that they should have told the police about it before coming. As it turns out, the glorious hidden city that Ms. Goucuff spoke of is actually a few cabins, and several very dishevelled looking junkies. One of those junkies becomes beligerant, and slaps Nima across the face, rather than listen to her. As she falls to the ground, her cards fall from her pocket, and spread out, as if pointing to something. When she raises her head, she sees the silhouette of a man with an arm missing at the elbow - just like the zombie she saw in her vision. Without waiting for Salinger, she gives chase.

When she catches up to him, she sees that he is merely a man, and uses her taser on him. Cowering on the ground, he claims that he didn't kill Meachum. Goucuff had dressed him up like a zombie and sent him to Meachum's house in order to give the neighbours something to see. If a zombie had committed the crime, it would make her legend grow.

Meanwhile, Salinger discovers a young girl who, for twenty dollars, reveals that Ben Meachum was a regular visitor to the commune before his mayoral campaign. He had fallen in love with her, and planned to leave his wife for her, because - after all - he had got her pregnant. In fact, Meachum had been romantically involved with Lauren Goucuff. They all had orgies at the commune, sharing partners. The campaign of slander against her was actually a plan they had concocted together to make her the Voodoo Queen by building her infamy. One night, though, Meachum's wife had followed him to the commune, and found him in bed with the girl. As she was actually as purist as Meachum had claimed to be, she was not above murdering her own husband for his infidelity with such evil people.

Mrs. Meachum ends up arrested, and Ms. Goucuff is freed, though Nima is not above contemptuously mocking the woman's desperate grasping at fame. Regardless, the police are still seeking Ms. Goucuff, on account of the heroin that was found at the commune.

After all is done, Nima notices that she dropped one of her cards. It is the Death card. When she picks it up, she has a sudden vision of herself, shot dead by Salinger. Though her partner doesn't know it yet, she knows that he will be the death of her.

Retrieved from "https://heykidscomics.fandom.com/wiki/National_Comics:_Madame_X_Vol_1_1?oldid=1455431"
Community content is available under CC-BY-SA unless otherwise noted.