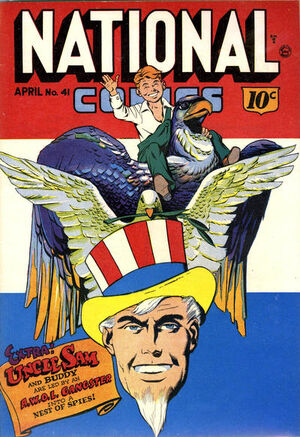 One move out of any of you, and I'll put a bullet through your head!

Appearing in "Uncle Sam (no title)"Edit

Synopsis for "Uncle Sam (no title)"Edit

One night three male burglars (Tom, Tiger, & 3rd guy), in full-body black cat costumes, with tails, break into Martin Brun’s supposedly-impregnable mansion, and at 10:00 exactly, they confront him. Ten years earlier, to the hour, Martin had wronged them, and now they vengefully claw him to death with their specially-spiked gloves, then steal a pile of cash out of his safe, then escape by walking along some high-tension radio-aerial wires.

The next day in his laboratory, Quicksilver hears this news on the radio, and the name of Martin Brun sounds familiar to him, and a quick check of his files confirms it; Brun was the former managing partner of a circus, and had a bad reputation for forcing his aerial acrobats to work with no nets. In fact, ten years ago, one of the four Vardoni Brothers (Antonio, the youngest) had been killed while performing. Brun had also had two silent partners, Kane and Abell, who Quicksilver now figured were probably in danger also.

That night he visits the late Brun’s home, figures out the escape route of the Three Black Cats, then tries to visit Sam Abell at his penthouse. Momentarily thwarted by the doorman, Quicksilver zooms through a locked door and up a long series of stairways to the penthouse. He hears furtive activity inside, and breaks down the door, cornering the Three Black Cats standing over the clawed-up body of Mr. Abell. One cat smashes a chair over Quicksilver’s head, but it doesn’t knock him out. The cats flee across a highwire to a neighboring building; Quicksilver still has his old circus moves, and follows them. One cuts the wire while Quicksilver is still on it, but he grabs the wire and tarzan-swings into a closed window, crash, and into a pretty lady’s apartment.

Quicksilver knows where the killers are headed next, and he races to the Hotel Belton, where Mr. Kane has a bachelor apartment. He finds the Black Cats scaling the multi-story vertical electric sign along one corner of the hotel, and follows. Reaching the roof, they decide to turn and fight. They lose, falling one by one to the pavement, six stories below. The oldest, Tom Vardoni, tells their story to Quicksilver, then dies.

In disguise, The Unknown infiltrates an occupied French village, as all the men (about 500) are being marched onto an armored and well-guarded train. He befriends a young lady and she happens to know the schedule of the departing train, and that it will lay over until night at Desjard and then proceed. That evening, the Unknown’s plan, based on this info, is told by him to his two French henchmen. They steal an ill-guarded German staff car, and as they drive away, one German recognizes “der Unknown!” At the high end of Montmons Grade (for which the train must slow down), at a spot where two tracks cross, the three set up a large mirror. When the slave train arrives, the engine crew see an oncoming train, then jump, and most or all of the German soldiers aboard also jump from the train. Meanwhile at the rear of the train, three stealthy figures climb aboard.

The Unknown works his way to the engine and brings the train to a stop. The slaves get out, and the two henchmen lead them to relative safety among a group of French Resistance fighters. The Unknown meanwhile has re-started the train and is working it up to top speed, racing toward the Rupp munitions factory. One German officer, Von Rentrop, has stayed aboard the train and now covers The Unknown with a pistol. One short fistfight later, Von Rentrop is ejected from the engine cab and off the side of a bridge, to his probable death. Several hours later the speeding train arrives at the Rupp plant, and (luckily) one key track switch has been lined for access to a particular spur track, leading directly to a really large powder storage building. The Unknown has already leaped to safety well before this explosive collision

Retrieved from "https://heykidscomics.fandom.com/wiki/National_Comics_Vol_1_41?oldid=1532152"
Community content is available under CC-BY-SA unless otherwise noted.