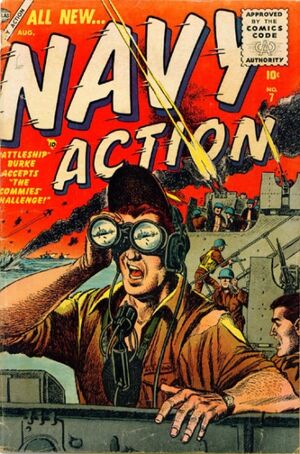 In August of 1952 a group of American marines watch as Naval officer Battleship Burke and his pal Salty Smith fight with Chinese soldiers, easily trouncing them with their bare hands. The marines approach Burke and Salty and learn that Burke is on leave to look for his brother Shannon Burke who is part of 3rd Division on important business when they were jumped by enemy forces. Burke learns that the soldiers that have greeted him are part of 3rd Division and that his brother had been captured by the Chinese during an operation to blow up a nearby dam along with their commanding officer.

Still needing to blast the dam, Battleship comes up with a means of doing so: they construct a crude raft to load up the dynamite on and send it down river toward the dam and it successfully blows up the dam. In the aftermath of the mission, Battleship tells his brother that he came to bring him a pair of socks that their mother had knitted for him.

Retrieved from "https://heykidscomics.fandom.com/wiki/Navy_Action_Vol_1_7?oldid=1447640"
Community content is available under CC-BY-SA unless otherwise noted.