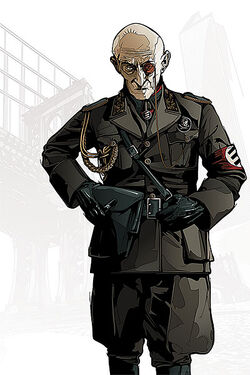 They were Nazis. If you can't kill Nazis, who can you kill?

The Nazis were a political group of fanatical far-right racist Germans that was founded out of the current of the far-right racist völkisch German nationalist movement in Post-World War I Germany. The party took control of the German government during the 1930's, led by its last long-term leader, Adolf Hitler, and established a totalitarian regime known as the Third Reich. Under Nazi ideology, the party advocated that the Aryan race were the superior race on earth. To maintain the purity and strength of the Aryan race, the Nazis sought to exterminate or impose exclusionary segregation upon "inferior races": Jews, Romani, blacks, homosexuals, the physically and mentally disabled, and political opponents. The persecution reached its climax when the party and the German state which it controlled organized the systematic murder of approximately six million Jews and six million other people from the other targeted groups, in what has become known as the Holocaust.

Following Nazi Germany invading Poland in 1939 and igniting the Second World War, the Nazis had dabbled in unorthodox plots in winning the war in their favor, which involved the occult, fantastical weapon projects, and its own Metahumans to counter their Allied counterparts such as the Justice Society of America and All-Star Squadron.

The Nazis were dissolved and shattered after Germany was overrun by the Allied powers in 1945. Prominent members of the political, military, and economic leadership of the defeated Nazi Germany that survived and captured were prosecuted for war crimes. The Nazis had since been recognized as the most widely recognized images of modern evil.

Despite the Nazis' atrocities, in the post-World War II era, there had been modern fringed groups and organizations relating or sharing common ideologies such as Neo-Nazism. Even in the metahuman community that there are supervillains that supported Nazism, such as the Aryan Brigade, Axis America and the Fourth Reich.

Retrieved from "https://heykidscomics.fandom.com/wiki/Nazi_Party?oldid=1547898"
Community content is available under CC-BY-SA unless otherwise noted.