Law Offices of Nelson and Murdock 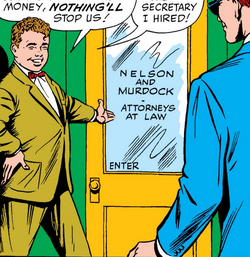 This law firm was established after Matt Murdock and Foggy Nelson graduated, thanks to Foggy's dad money. Karen Page was quickly hired by Nelson as a secretary[1]. The firm has sometimes been (mistakenly?) depicted as "Murdock and Nelson" [2]. Nelson and Murdock became high profile attorneys with numerous cases and clients. Nelson eventually used his fame to successfully run and be elected as the District Attorney of New York City.

At this point the law partnership had to be dissolved. Murdock and Nelson had a brief period of estrangement when Nelson was elected. Murdock forced Nelson to leave the office and party headquarters on the eve of his election. Murdock (as the crime fighter Daredevil) knew that organized crime members had hired the Stilt-Man to kill Nelson at the law office on the night of the election. [2]. Daredevil prevented the assasination. Nelson won in a "landslide" and the two eventually reconciled.

Later in New York, Murdock and Nelson argued over the Black Widow being charged with murder. Unbeknownst to Murdock, Nelson was being blackmailed by Mr. Klein to prosecute the Widow. Murdock defiantly announced that he would defend her. At this point, Murdock appears to have resigned as Assistant District Attorney due to his conflict of interest [7]. Murdock successfully defended the Widow. Matt Murdock became romantically involved with the heroine and the two moved to San Francisco. [8]. Murdock soon became a partner at Broderick, Sloan, and Murdock for most of the time he was in San Francisco. [9]

Foggy Nelson was shot in New York. When his old friend Murdock heard the news, he hurried to his bedside. [10]. Nelson recovered. Murdock stayed in New York as well. However, Nelson was defeated for District Attorney during his next reelection bid. [11]

Matt Murdock had decided to permanently remain in New York and make some changes in his life. He had begun a relationship with Heather Glenn who would eventually become his fiancee. He also decided to open "a place where the poor can come for free legal advice". He named his new practice the Storefront Legal Clinic".

Murdock sensed than Foggy Nelson would lose his election. In advance of the results, he had printed business cards for the "Storefront" with Nelson's name on it. He stated that they would "always" be partners. The "Storefront" prospered for some time. Becky Blake was hired as the Clinic's secretary. Nelson appeared to be in charge of day to day operations. Eventually, the Storefront lost it's government funding and grants. Nelson and Murdock's relationship again became strained. Nelson lamented that there were few, if any paying clients. Of course, Murdock spent a great deal of his personal time as the crime fighter Daredevil. Murdock and Nelson were also both mutually absent for crucial court cases involving their clients. The Storefront met its final demise when the Hand bombed the clinic in an attempt to assassinate Matt Murdock. [12]

Nelson and Murdock Back in Business

From the rubble of the Storefront, Foggy Nelson took a phone call from J. Jonah Jameson of the Daily Bugle. The Bugle was involved in a defamation lawsuit from the Kingpin for a series of articles they had run about the Kingpin's candidate Randolph Cherryh. Nelson negotiated a enormous fee from Jameson. Murdock and Nelson again appeared to put aside their differences. Rebecca Blake continued with the firm as well. The fee from the Bugle was large enough for Nelson and Murdock to become established in a Manhattan high-rise. [13].

Later, once again, the practice became insolvent due to a number of reasons. Murdock would lose his law license for some time. Nelson went through a difficult divorce. Murdock continued to be absent or somewhat distracted due to his activities as Daredevil. However, the friendship and partnership appear to continue in the Marvel Universe.

Nelson and Murdock Once Again

During Mysterio's plot against Daredevil, Foggy Nelson was accused of the murder of their client, a divorcee (actually a porn star Mysterio hired) who hired their firm to help settle her divorce case and was sent to prison. Rosalind Sharpe, fearing the bad publicity this will bring to their firm and her career, fires Foggy to sever his ties to the firm. Matt quits the firm after Rosalind makes it clear he is forbidden from helping Foggy in this case. [15] After Mysterio is unmasked as the mastermind of this plot and Foggy is released, despite Karen Page having been killed in this incident, Matt is named as the sole beneficiary of her will and the money he inherited from it allows the two to re-establish Nelson and Murdock as their own business again. [16]

A New Beginning and a New Partner

Matt Murdock again lost and again regained his law license and his former legal secretary now also an attorney, Becky Blake, joined the firm as a partner. At this time, besides changing to a new location, the firm also went in the direction of not having an office that accepts walk-ins, but rather one that selectively chooses its clientele to avoid dealing with Daredevil stalkers. [17]

Some time later, Foggy held a Christman party with Debbie and Heather Glenn, without Matt, who was nowhere to be found[46].

When the firm was being relocated in the Worldwide Plaza, Matt Murdock stepped in and was comforted by Karen Page for taking the Kingpin down, even though the Owl was already trying to take his place[47].
The day after, Matt and Foggy worked on a case against a Long Island City man breeding wolf hybrids on rooftops[48].

Many years later, Nelson and Jeryn Hogarth assisted Reed Richards and Susan Storm to sign a contract which would sell the entire Pier Four to the Gideon Board investment group[49].

Some time later, Peter Parker came to the office to meet Matt Murdock, whom he hired to represent Felicia Hardy, charged with the murder of Garrison Klum. As soon as he learned she was innocent, they both agreed to break her out of Ryker's Island[50].

none|thumb|James James called Mr. Murdock as soon as the verdict for Mr. Pampolos was in.[52]

Retrieved from "https://heykidscomics.fandom.com/wiki/Nelson_and_Murdock_Law_Office?oldid=1570647"
Community content is available under CC-BY-SA unless otherwise noted.