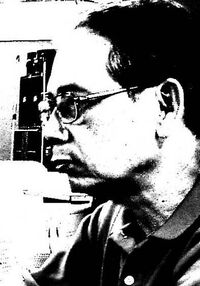 Nestor Malgapo was born in Barrio Baluarte, Gapan, Nueva Ecija. At a young age, Nestor was resourceful, driven & independent; he sold comics to fund his elementary schooling. He enjoyed the admirable work of artists in those comics, such as Francisco V. Coching, Nestor Redondo, Alfredo Alcala, Elpidio Torres & the like. He never dreamed that one day, he himself would contribute to the comics he had been selling.

Nestor graduated from high school with the award, "Artist of the Year". Because of his talent, he had no trouble getting work - he was hired, almost instantly, as a sign painter for billboards & passenger buses.

He then worked as a cameraman for a printing press, which printed Extra Komiks & Romansa Komiks. It was there that he witnessed comic artist, Felipe Ilag, feverishly drawing page after page for Mars Ravelo's "Asuwang", trying to beat the deadline. This was Nestor’s first glimpse of the professional world of Comics Illustration. He assumed then that comics were drawn with the aid of machines, when in fact, they were drawn by hand, a fact that left quite an impact on him!

From that time on, Nes decided that he, too, will be a comic book artist. He made several sample drawings & shopped them around comics publishers. But because the art directors of those companies were strict & exacting in their standards, it took him a year of study & practice until he was finally given a break drawing "Walang Mukha", written by Tony Ma. Alcaraz for Sinderela Komiks. That was the start of what would be his long career, drawing comics for various publications.

Ever enthusiastic in his search for creative outlets, Nestor tried his hand at animation as layout artist for Island Animation, headed by fellow illustrator Abe Ocampo. He also authored some comics scripts, & had illustrated his own stories for Atlas Publishing Co, Inc. & Ace Publications, Inc.

The success of HAND influenced the birth of the UAP or United Artists of the Philippines, a much larger organization with a broader membership of writers, illustrators, letterers & colorists.

Nestor also served as President of the SPIC or the Society of Philippine Illustrators & Cartoonists after Nestor Redondo relinquished the position to pursue his career in the United States.

Retrieved from "https://heykidscomics.fandom.com/wiki/Nestor_Malgapo?oldid=181515"
Community content is available under CC-BY-SA unless otherwise noted.