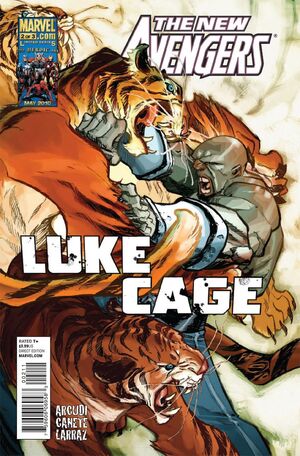 Appearing in "The Land Where the Killers Dwell"Edit

Synopsis for "The Land Where the Killers Dwell"Edit

A man in a wheelchair is threatening some Russians, having already killed one of them, before letting them go. Later on, Luke Cage threatens a street tough, making him run away before grabbing his phone from his car and leaving. Back at Arthur Dyson's place, Cage calls Jessica Jones who berates him for staying in Philadelphia too long. After the call, Luke recaps about his conversation with Leodis in hospital when he tells him that he's been helping the heroin dealers in Philadelphia by being their muscle so they would help him with any other trouble in the area. Leodis lead Cage to the street tough he beat up earlier and his phone lead him to a man named Alexander Comillo. When Cage gets to Comillo's address, it is revealed that he is in fact Alejandro Cortez (also known as Lionfang) and he was the man in the wheelchair shown at the start of the story. Cortez sets some brainwashed big cats upon Cage and it is revealed that Cage had put Cortez in a wheelchair by accident. Cortez then orders his big cats to back off Cage and after a heated discussion Cage tells Cortez to tell his boss that Cage is coming for him.

Retrieved from "https://heykidscomics.fandom.com/wiki/New_Avengers:_Luke_Cage_Vol_1_2?oldid=1448060"
Community content is available under CC-BY-SA unless otherwise noted.