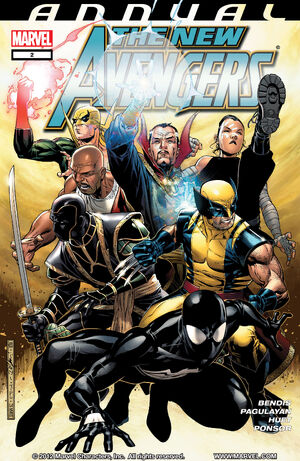 Our struggles of late. I have had to call upon darker forces than I would normally use….Forces I thought I could control, but I can’t. It was arrogance. The same arrogance that led me down the path I’m on in the first place. My hands are useless again. And I tried to disguise it. All these years, and I have learned nothing. There’s—I’ve had no time to deal with what I’ve done, and the forces are overpowering me. I wanted to help you, my friends. I wanted so much to help my old friend Bruce Banner. But I failed. And I have failed at my task as Sorcerer Supreme of this dimension. I—I don’t think I can help you anymore. I need to atone for what I have done. I need to relearn all that I have lost. And put back magics which I had no business using in the first place. I can’t help you anymore. You need to leave here. We all do. I’m so sorry, my friends.

Appearing in "The Trust, Conclusion"Edit

Synopsis for "The Trust, Conclusion"Edit

In the S.H.I.E.L.D. Helicarrier, Maria Hill receives news that there's been a break-in at the Raft: an assailant, using magic, has liberated the members of the Hood's gang who were recently taken into custody by the New Avengers. That same night, the Hood ambushes Tigra in her bedroom and forces her to reveal the location of the New Avengers.

In Doctor Strange's Sanctum Sanctorum, Jessica Jones and the Night Nurse are enjoying a little girlish gossip when the New Avengers return, triumphant and in high spirits. But Strange is acting stricken, and he refuses to let anyone touch him. Iron Fist wonders if he'd like them to leave and let him have his own home back.

Across the street, the Hood and his gang eye what appears to be a boarded-up brownstone. Hood's demonic powers see through the illusion to the intact Sanctum below. Spider-Man makes a sudden appearance outside, revealing both parties to one another -- Spidey dashes back inside to warn everyone and take baby Danielle Cage to safety, while the Hood and his followers charge the building.

The New Avengers are caught unprepared despite the warning -- Jessica is pursuing Spider-Man and her baby -- and the Sanctum's round window suddenly disintegrates, removing the magical seal on the building and letting the attackers pour in. The Hood immediately rushes to where Strange lies on his bed and shoots him several times in the chest, killing him.

Outside, a pair of S.H.I.E.L.D. agents stations outside the Sanctum report that something is happening. Inside is a melee. The New Avengers are outnumbered and nearly overwhelmed despite unexpected reinforcement from Tigra. Wong attacks the Hood and forces him to retreat, but Night Nurse can't find a pulse on Strange and tearfully pronounces him dead.

Suddenly, Strange's eyes light with a red glow and he shambles to his feet, again telling Wong and Night Nurse not to touch him. He lumbers out of the room. Upstairs, the New Avengers are clearly about to lose when Strange, once more transformed into his Zom-berserker self, shoots up through the floor and casts a spell that incapacitates friend and foe alike. Wong and the Nurse arrive to see everyone paralyzed in a spasm of anguish and Strange, alive again but dazed, in the center.

Wong is able to take back the spell and free the New Avengers, but the damage is done. Doctor Strange confesses that he had been using black magic to conceal the injuries in his hands, and that it had overwhelmed him. He apologizes for failing them as he had failed the Hulk and teleports away, saying he can no longer remain with them and must find his way back to the path of light magic.

Ms. Marvel appears with two agents of S.H.I.E.L.D. to arrest them, but when she sees the wreckage of the house and all the fallen criminals, she has an abrupt change of heart and says that, officially, she doesn't see any of the renegade New Avengers.

Elsewhere: the Hood lands in a quiet alley, asking 'someone' why they failed. The answer he receives appears to give him heart.

And at Stark Tower, Jessica Jones holds her baby, saying she wants to register and quietly pleading for them to let her in.

Retrieved from "https://heykidscomics.fandom.com/wiki/New_Avengers_Annual_Vol_1_2?oldid=1447899"
Community content is available under CC-BY-SA unless otherwise noted.