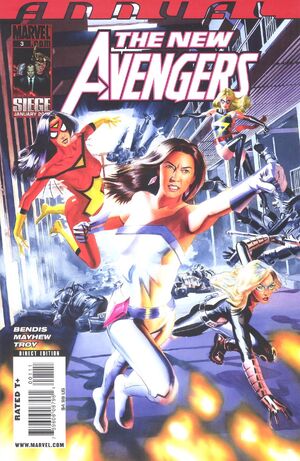 Clint Barton is in custody and that leaves not only Barton's life in severe jeopardy but all the New Avengers are at serious risk. So the ladies of the Avengers ban together to do what they have to do in a double-sized blockbuster Avengers story with a startling new chapter in the life of Jessica Jones. Brought to you by Brian Michael Bendis and artist extraordinaire Mike Mayhew.

Retrieved from "https://heykidscomics.fandom.com/wiki/New_Avengers_Annual_Vol_1_3?oldid=1753379"
Community content is available under CC-BY-SA unless otherwise noted.