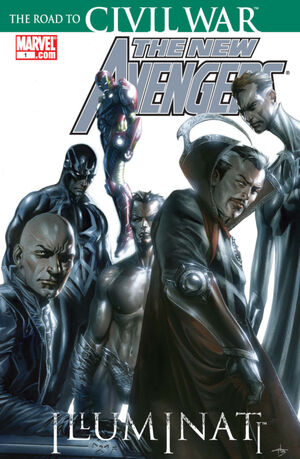 What happens when you disagree? When one of these earth-changing moments finds you all at odds with each other, here in a secret meeting? What happens then? Walk away now.

Iron Man, Black Bolt, Professor X, Doctor Strange, Namor and Mr. Fantastic gather in Wakanda at the behest of King T'Challa. Iron Man says he feels that it was their fault the Kree-Skrull War came to Earth. His reasoning is that each one of them had the knowledge of the enemy. But, if the heroes of Earth, the only protectors for their people, unite into a superhero government, then they can be better prepared for another invasion. Unfortunately, many disagreed; Namor doesn't believe that they control heroes even in the knit-tight groups they have now; Mr. Fantastic points out that there would be fight over leadership; Doctor Strange expresses that bureaucracy would conflict with heroes; Xavier also points out that the Skrull nearly turned the public against the Avengers, giving them the same feeling that the general population feels against mutants. Iron Man attempts to assert that if they could champion the X-Men's cause, then mutant-human relations could improve and end the hatred. However, T'Challa says that it would do the opposite; the people would simply have an excuse to hate heroes as well. Also, there are many rebel type heroes, like Spider-Man and Daredevil, counterculture. And their group is counter-establishment. Iron Man states that he just wants to do more. Namor cuts in, accusing Iron Man and Xavier of having questionable characters on their respective teams; he even asks Black Bolt if his brother, who was the architect of the invasion, if he was executed or not. Therefore, Iron Man's fantasy is just impossible. Nonetheless, Mr. Fantastic agrees that the information they know could help deal with larger threats in the future. However, Namor tells them that they cannot tell anyone about this meeting, not friends or family; he doesn't want a secret about Atlantis leaked. Iron Man says that the invasion was bigger than any of them and they need to be prepared. Strange asks if they will have an honor system in their newly formed group; Iron Man says that no secret can be kept from Xavier, which he reluctantly agrees to. Everyone but T'Challa agrees to this proposal, who demands that they end this debate and walk away. He reminds them that the Skrulls had an easy time attempting to turn the public against the Avengers, simply because everyone knew what could happen. He asks what would happen if one of them disagrees on a world-changing moment. Nonetheless, the newly formed Illuminati decides to stay. The first subject is about Krakoa...

Sometime later, the Hulk has smashed Las Vegas, killing twenty-six people and a dog. Iron Man has a discussion with S.H.I.E.L.D. Director Maria Hill, who believes that they can't control the Hulk anymore. She states Norman Osborn, aka the Green Goblin, as example, for all the times he escapes whereas Spider-Man doesn't finish the job. She asks Iron Man if he is doing anything, for the government is looking for a reason to blame heroes.

At the Avengers' Hydrobase, Iron Man throws up the proposal to launch the Hulk into space to the Illuminati, excluding Xavier. Only Namor is opposed to this, accusing them of not being able to cure Banner to the best of their abilities. Mr. Fantastic and Strange explains did all they could from dampening his powers to banishing him to the crossroads. However, Namor sees this as punishment for what the Scarlet Witch did to the Avengers. Nonetheless, everyone but Namor votes for Iron Man's plan. Namor responds by punching Iron Man out of the complex before tangling with him, tearing off his helmet underwater. They are both brought up magically by Strange. A struggling Namor says that Banner would return from whence they sent him and he will kill them all and he'll be right. He dives underwater after Iron Man tells Strange to let him go, admitting that T'Challa was right too.

The Illuminati goes forth with their plan, using a Nick Fury LMD to trick Banner onto a "malfunctioning" weapons satellite, which is actually a starship, which sends the Hulk far from Earth.

In the present, the Illuminati has gathered once again, excluding Xavier again, where Iron Man reveals his knowledge that the U.S. government is planning on passing the Superhuman Registration Act. It involves any superhuman, including mutants, to reveal their identities to the government and became an accountable employee. Refusing to do so is considered a federal crime. Already, S.H.I.E.L.D. is developing its own special unit to take down superhumans. Namor sees it as a simple solution to take care of everyone else just like he did the Hulk. Iron Man insists that everything, House of M, the 198, the Secret War and the Avengers disbandment has all lead to this. He insists that all of them support registration before things get ugly, before someone is made an example of. He explains his views:

A hero, probably a young one... One of the Young Avengers, or those kids in Los Angeles... Some carefree happy go-lucky, well-meaning young person with the best of intentions will do something wrong. He'll be trying to save someone- do something heroic- but he'll make a mistake. Turn to the left instead of the right and people will be hurt or killed because of it. And it'll happen on live TV, or it'll be recorded... and like Rodney King, it'll play over and over. All over the world. Until the unrest that is already bubbling over will boil over... and every politician looking to make a name for himself will run right on TV and they'll tell America how they are going to save the world from these out-of-control costumed characters who think the law doesn't apply to them. And half of us will go along with it and half of us won't. And because of this mini-rebellion, our lawmakers will be forced to make an example of someone. Someone like our friend Spider-Man. Someone they can make a real spectacle of. Someone they can unmask on TV, destroy his marriage and family and pin a crime or two on! All for the whole world to see. And the country will rupture. Sides will be taken and people will be hurt. Friend against friend. People who used to be adversaries finding themselves teamed up against a common cause. Friends dying at the hands of a former ally or teammate. That is what will happen.

Iron Man repeats his request for them all to support this act; Namor views this as the result of what wouldn't have happened if they had created Iron Man's fantasy about a superhero government. Iron Man insists that they should had listened to him then. However, Namor sees this as no concern of Atlantis and threatens war if the surface comes after his kingdom. Strange also disagrees, stating that it would be simply be giving into people's fear and ignorance. Their friends would fight against registration, even to the death, for their rights. However, Mr. Fantastic completing agrees with Iron Man's point of view, compelling Strange to leave. Black Bolt also disagrees. Mr. Fantastic notes that it was fun while it lasted.

Retrieved from "https://heykidscomics.fandom.com/wiki/New_Avengers_Illuminati_Vol_1_1?oldid=1447904"
Community content is available under CC-BY-SA unless otherwise noted.