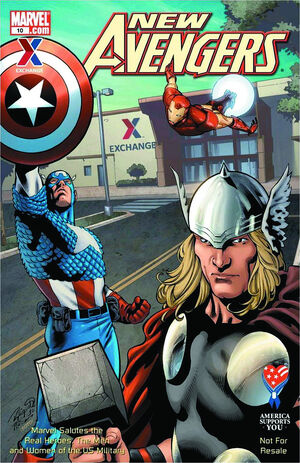 Captain America battles Whiplash in Manhattan to rescue the son of technology developer Mason Wilhite. Thor tackles Abomination outside of Indonesia. Iron Man stops a rampaging Fin Fang Foom in Staten Island. The three Avengers later discover that all of their missions are somehow connected, but the mystery takes a back seat as they cut the ribbon at the opening of a new AAFES store at an Air Force base.

Retrieved from "https://heykidscomics.fandom.com/wiki/New_Avengers_Marvel_Salutes_the_U.S._Military_Vol_1_10?oldid=1614760"
Community content is available under CC-BY-SA unless otherwise noted.