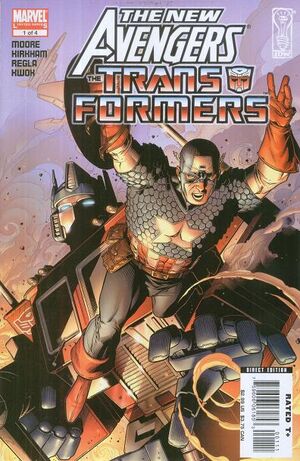 A talkin' truck? Are you kiddin' me?

The story begins in Latveria with the country and its neighbor Symkaria are about to begin an all out war; where Captain America, Wolverine, Luke Cage, and Spider-Man have entered the country via Quinjet in order to trace the source of a strange radiation signal. They come across a large structure made by Decepticons. As they claw their way in; the heroes get attacked by the automated system activates and scans the heroes; scanning them during the fight that ensues; determining that Spider-man was a match.

As soon as this happens Spider-man gets zapped and knocked out but as he collapses Runabout comes out of an opening and catches him on the hood of his vehicle mode and drives him away. As the heroes flee to regroup; the Autobots are watching and determine that the increased aggression of the heroes which is causing them to be at each others throats and act sloppy is because of the building and more importantly Megatron to get the humans to attack each other and wipe themselves out so that Megatron and his Decepticons may come in and siphon all the life enabling energon from the planet so that they may continue their war with the Autobots.

Meanwhile Spider-man begins to awaken strapped down to a table; negating his superhuman strength. Falcon (Sam Wilson) and Ms. Marvel show up to the call of Captain America to help him but the machines to boost the aggression of the humans have gotten to the heroes pretty well now but just as they are all about to attack each other; Optimus Prime, Jazz, Prowl, Bumblebee, and Ratchet show up to try to get the heroes to leave and avoid involvement in their battle. Blinded by Rage Captain America shouts out "Avengers Attack" and the heroes focus on the strange enemy that showed up before them

Man and Machine, Part One on Transformers Wiki

Retrieved from "https://heykidscomics.fandom.com/wiki/New_Avengers_Transformers_Vol_1_1?oldid=1679153"
Community content is available under CC-BY-SA unless otherwise noted.