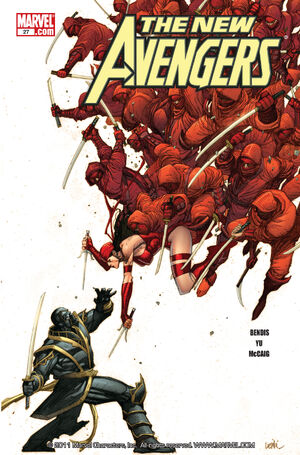 The New Avengers return!! And they are bringing superstar artist Leinil Yu with them!! But who are the New Avengers and what are they doing post-Civil War? Plus the return of Ronin!! It’s Ronin versus Elektra for control of the Japanese underworld!

Spider-Man uses the classic Star Wars line "I'm Luke Skywalker and I'm here to rescue you." when freeing Echo from The Hand.

Retrieved from "https://heykidscomics.fandom.com/wiki/New_Avengers_Vol_1_27?oldid=1652877"
Community content is available under CC-BY-SA unless otherwise noted.