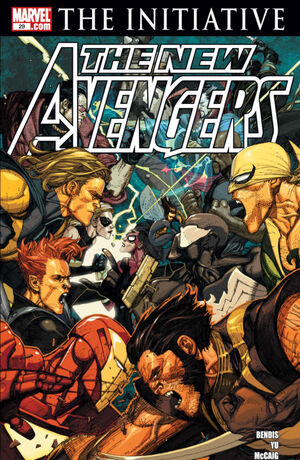 The war is over when we SAY it's over.

In Tokyo, the New Avengers are surrounded by the Hand ninjas, led by Elektra. Spider-Man states that they "should go back and fight brother Voodoo."

Flashing to yesterday, at the Raft prison, the New Avengers are surrounded by the Mighty Avengers and S.H.I.E.L.D. Iron Man declares that they are resisting registration and the Civil War is over; Luke Cage retorts that the war is over when they say it is over. Unfortunately for the New Avengers, Iron Man had deployed a localized neural net to sap them of their powers. He pleads them to surrender for the sake of their friends and families. However, Doctor Strange utters a spell, inflicting them with their worst fears; the Sentry is faced with the Void; Wonder Man meets his brother Grim Reaper; Ms. Marvel is attacked by the Brood; Ares is forced at the mercy of Zeus; Wasp is attacked by Yellowjacket; Black Widow is declared a traitor to her people; and Iron Man is face-to-face with a monstrous version of Captain America. They soon snap out of it, their quarry having escaped.

At the New Avengers' hideaway, a boarded house, they arrive back before Wong, Jessica and Danielle. Then, the Mighty Avengers arrive, bursting in, only to find no one in; Doctor Strange had used his magic to rendered his teammates invisible, something that not even Iron Man could detect them, forcing them to leave.

Next day, the Mighty Avengers arrive at Rand Corporation, demanding to talk with Danny Rand about the other night; Rand denies any involvement. His attorney, Jeryn Hogarth, speaks in his defense, stating that technically, he is registered in the States as a lethal weapon, as is the Superhuman Registration Act. Iron Man points out that he need to register with the government but Hogarth cuts him off, stating that the event has yet to be laid out in court and they have to proof if Rand's abilities are truly superhuman. Ms. Marvel snaps at him to be quiet and expresses her serious concerns about Cage, Jessica and their child and warns Danny that they are playing a dangerous game in disobeying the law - someone may get hurt; Rand retorts, "You mean someone other than Captain America?". Iron Man produces a hologram of Iron Fist with the New Avengers as proof; Hogarth states that he must have all the relevant files if he takes it to the highest court of law; he asks which will last longer: Rand's trial or Iron Man's tenure as Director of S.H.I.E.L.D.? The Mighty Avengers are forced to leave, as Ms. Marvel makes one last plea to tell their friends to stop. Once they've left, Hogarth suggests that they release the digital recording on the Internet but Rand refused to do so. Then, Dakota North turns up, bringing a letter from Matt Murdock. He reads the letter, learning that it is from Echo, asking for help against Elektra and the Hand, before they use for for unknown purposes. He forwards this message to the New Avengers, who decide to go to Japan. Then suddenly, Brother Voodoo turns up on their doorstep, performing unknown magic, which is seen from afar by the Mighty Avengers.

In the present, Cage decides to "talk" with Elektra: criminal-to-criminal.

Retrieved from "https://heykidscomics.fandom.com/wiki/New_Avengers_Vol_1_29?oldid=1447948"
Community content is available under CC-BY-SA unless otherwise noted.