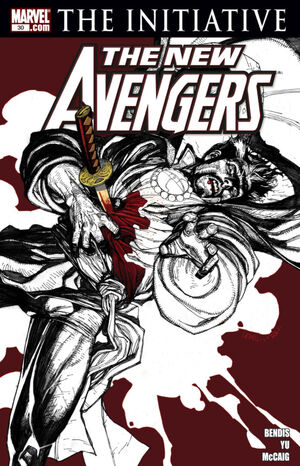 Iron Man and the Mighty Avengers are standing outside Doctor Strange’s house in Greenwich Village, watching Brother Voodoo attempting to reveal Luke Cage and his Secret Avengers. Doctor Strange conceals them with more magic, and Brother Voodoo fails to find them, although he claims that Doctor Strange is the Master of the Mystic Arts and that he could easily conceal himself and the other heroes without Brother Voodoo’s knowledge. Brother Voodoo leaves with the Mighty Avengers, but Iron Man stays behind. He attempts to reason with the invisible Secret Avengers, but they do not respond and he leaves. Peter Parker asks why they are in hiding and Luke Cage replies that they are doing things the way that they want to, and confesses his paranoia that someone has been manipulating recent events such as the Raft breakout, HYDRA, S.H.I.E.L.D., the Secret War, and the Civil War. While the heroes consider this, Wong sees something and warns his master.

Doctor Strange and the Secret Avengers notice that Clint Barton, the former Hawkeye, has come to see Doctor Strange. Although initially suspicious of him, the Secret Avengers reveal themselves. Luke Cage angrily confronts him, asking him why he has not sided with Tony Stark. Barton decides to leave, but Wolverine reveals that they are going to Japan, much to Luke Cage’s annoyance. Cage is adamant that Barton shouldn’t accompany them. Doctor Strange offers to cast the Spell of Tartashi, which would show purity of spirit and reveal if anyone in that room was living with deception towards them. The spell does not affect any of the Avengers (Strange claims that anyone attempting to deceive them would be suffering a seizure) and Cage agrees to let Barton come along, under the guise of Ronin.

Retrieved from "https://heykidscomics.fandom.com/wiki/New_Avengers_Vol_1_30?oldid=1494708"
Community content is available under CC-BY-SA unless otherwise noted.