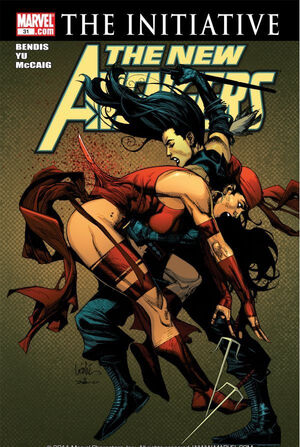 What -- what does this mean?

Jessica Jones and Wong are at Doctor Strange’s house when all of a sudden, the Orb of Agamotto shows Doctor Strange impaled with a sword. The scene passes to Japan, where a violent fight between the Hand and the Secret Avengers is taking place. Luke Cage attacks Elektra, and Iron Fist faces off against Maya Lopez, aka Echo. Spider-Man is attacked and falls outside, where another legion of Hand ninjas is waiting. He is deluged in ninjas but Clint Barton, aka Ronin, comes to his rescue. Elektra then sets Luke Cage on fire.

Wong frees Doctor Strange’s astral form and he sends the Hand ninjas to sleep, also freeing Echo from the Hand’s mind control. Furious, Echo targets Elektra, who is still fighting Cage. Echo violently stabs and disembowels Elektra, killing her. As the Hand ninjas leave, Wolverine smells a smell that he does not recognize. The Avengers gather around Elektra’s corpse, only to discover that she was a Skrull…

Retrieved from "https://heykidscomics.fandom.com/wiki/New_Avengers_Vol_1_31?oldid=1447950"
Community content is available under CC-BY-SA unless otherwise noted.