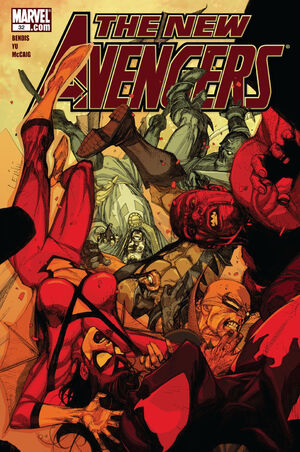 No one is talking because no one trusts each other anymore. [...] Because any one of us could be a Skrull.

Appearing in "The Trust (Part 1)"Edit

Synopsis for "The Trust (Part 1)"Edit

With a bound, deceased Skrull-Elektra in the aisle of a Rand Corporation plane, the New Avengers fly in silence out of Japan toward New York City. In the plane's seats, each Avenger is brooding over the impact of there having been a Skrull leading The Hand. Spider-Man, with his usual verbosity, breaks the silence by starting a conversation over the situation. Wolverine informs Spidey why everyone is so reticent to speak: they realize that any one of them could be a Skrull and Skrulls could have infiltrated just about any organization on earth. Wolverine pointedly comments on each member on the plane itself, including Luke Cage and Doctor Strange.

Retrieved from "https://heykidscomics.fandom.com/wiki/New_Avengers_Vol_1_32?oldid=1447951"
Community content is available under CC-BY-SA unless otherwise noted.