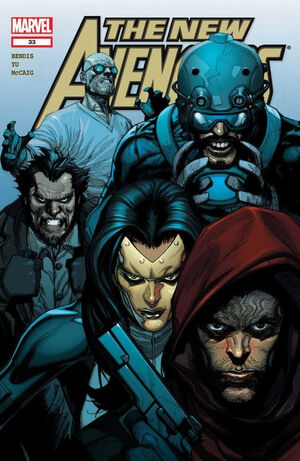 You're gonna trash my bar. Again! Screw this, man. I'm moving to Portland!

-- Hank The Bartender to Wolverine

Appearing in "The Trust (Part 2)"Edit

Synopsis for "The Trust (Part 2)"Edit

While the New Avengers stay a hotel, Clint Barton remembers his being instructed by Captain America the Avengers for combat and instructing them not to rely on their powers. He attributes this experience to his fighting skills he displayed in Japan.

Spider-Man and Luke Cage get into an argument about whose side Spider-Man is on and about who is a Skrull. Clint Barton interrupts them, saying Spider-Woman was the Skrull. However, Wolverine counters that she is not a Skrull because she gave the Skrull corpse to Tony Stark. Cage and Spider-Man continue arguing until their food arrives.

In Hell's Kitchen, Leland Owlsley prepares to auction the cyborg Deathlok to a group of super-villains. However, a man tells him against auctioning the robot. The Hood shows up out of nowhere and guns down Leland before disappearing. The Hood's representative explains that Owlsley did not get permission to steal the robot.

The New Avengers reach the Sanctum Sanctorum. Clint Barton tries giving his Ronin costume back to Maya Lopez, but she insists that he keeps it. Wolverine visits a familiar bar and the bartender that Parker Robbins is in the back.

Wolverine eavesdrops on the Hood and his cousin before busting down the door and charging at them. The Hood turns invisible to evade Wolverine's claws and reappears with his guns pointed at the super-hero's head at point-blank range.

Retrieved from "https://heykidscomics.fandom.com/wiki/New_Avengers_Vol_1_33?oldid=1517561"
Community content is available under CC-BY-SA unless otherwise noted.